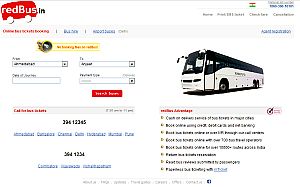 Pilani Soft Labs has issued a media statement announcing it has raised $6.5 million in its Series-C funding.

The funds will be used to expand its footprint and reach in its current markets.

redBus has crossed 3.5 million tickets and has registered Rs. 120 crores in gross bookings.

In the media statement, Phanindra Sama, CEO and co-founder, redBus, said, "It's highly motivating for us to get backed by all our three existing investors. At this stage of our journey, our business is strengthened by the network effect. It's encouraging for us to see government participation on our platform. Recently the Goa Government Transport Corporation adopted our technology. With the latest fund raised we plan to strengthen our capacity to serve the increasing business."

Charan Padmaraju, CTO and Co-founder-redBus, added that the company is an early adopter of of cloud computing and that all its servers are on the cloud.

"While the bus market is attractive, the quality of the team is even more compelling. They have solved a hard problem grounds up, institutionalized a culture that engenders ethics alongside success, and have achieved scale in a fragmented space," said Ashish Gupta, Partner, Helion Venture.

This is the third round of funding received by the five-year-old company. Earlier, it had raised $1 million in its angel round from Seedfund and an undisclosed sum from Inventus Capital Partners and Seedfund in July, 2009.

The current round was led by Helion Venture Partners, with Inventus and Seedfund participating. However, Helion remains the largest shareholder, Anand Lunia, executive director of Seedfund, told Techcircle.in.

Interestingly, Helion is a major investor in Nasdaq-listed online travel company MakeMyTrip, which owns bus ticketing site Ticketvala.in. However, Ticketvala is not a significant revenue contributor to MMT today. MMT also had a strategic partnership with Redbus before acquiring Ticketvala.

RedBus has risen from gross revenues of Rs 30 crore in 2008 to Rs 60 crore in the fiscal year ending March, 2010, and now expects to reach Rs 120-150 crore this year. Gross revenues include bus ticket revenues and not just commissions on tickets.

The start-up is focused on scaling up its ticketing site and its software platform Seat Seller for bus operators. It is also aiding in computerisation of the transport industry. RedBus is adding 100 people this year, primarily to its call centre facility. It also runs offline distribution with 75,000 point of sale outlets and is expanding across the country.