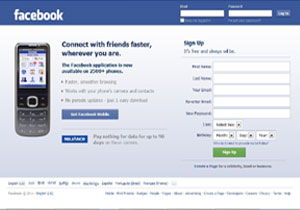 Facebook will begin mixing paid advertising content with users' updates from friends and family in early 2012, marking a commercial invasion of the social activity that the network has generally held to be sacrosanct.

Normally relegated to the ad column on the right side of the page, advertisers will soon be able to pay their way into the main Facebook news feed, a move that will help companies reach more potential customers and Facebook to generate more revenues ahead of its IPO. However, it might alienate users who have come to rely on the free service to protect their socialising from ads.

"Facebook is under a lot of pressure to make money right now," said Rebecca Lieb, an analyst with the Altimeter Group. "Users have to understand the value exchange of getting what you pay for."

Facebook experimented with introducing paid advertising into the news feed in late 2006, but discontinued the practice in 2008 because it was too "disruptive" to users.

The roll-out in the new year will focus on "Sponsored Stories," a form of advertising that takes a user's action on Facebook, such as when a person "Likes" Starbucks or writes a comment on the Coca-Cola page, and repackages it into an ad box that is shown to the person's friends. Now that ad will appear directly in the stream of updates about friends' parties and lunch menus.

Facebook said it would be cautious with the move.

"Our goal is to do this thoughtfully and slowly," it said. "We hope to show people no more than one Sponsored Story in their news feeds per day and the story will be clearly labelled as sponsored."

Sponsored Stories have raised concerns among privacy advocates and Facebook users who say Facebook is co-opting spontaneous social comments for commercial gain, and that it is unfair that the company does not allow users to opt out from appearing in the ad unit.

Ms Lieb added that advertisers might have as much to be concerned about with the new ad placement as users.

In newspaper advertising, for example, an airline is guaranteed that its ad will not be placed next to a news story about an aircraft crash, she said. With Facebook ads being integrated into the News Feed, there is no guarantee that an ad will not appear above or below a negative user comment about the advertiser, or a negative comment in general.

"It remains to be seen what this advertising will look like next to photographs of people vomiting at a frat party," she said. "No brand wants that."

Nonetheless, many marketers have been clamouring for greater advertising options to reach Facebook's vast audience of more than 800m active users.

"They think it's the big one," Mr Wood said. "The news feed is where it's at. A solution that integrates some kind of brand marketing into that feed is incredibly powerful. But they need to be very careful about what the consumer response is to that."