While it is no secret that we Indians love our music, according to a recent study by Nielsen Informate Mobile Insights, which reveals insights about entertainment consumption on the smartphone in emerging Asia, we love it more than any of our counterparts in the region.

In terms of the total time spent on smartphones on a daily basis in 2013, India came in second to last with its smartphone users spending 156 minutes (or 2.6 hours) on their devices. Malaysia led the pack with 213 minutes (or over 3.5 hours), while Thailand came in second with 190 minutes (over 3 hours).

Nielsen Informate Mobile Insights did an in depth analysis of around 12,000 smartphone users across five Asian countries including India, Thailand, Malaysia, Indonesia and the Philippines. A majority of these (8,000 or 68 per cent) came from India.

Nielsen installed its 'meter' on the smartphones in order to log all usage on the device. These logs were aggregated by its servers in order to allow Nielsen to perform in-depth analysis on usage patterns and reference them against panellist demographic profiles. The on-device-meter captured call patterns, browsing habits, game popularity, application install and usage, all in real time to provide insight into emerging trends - as they happen. 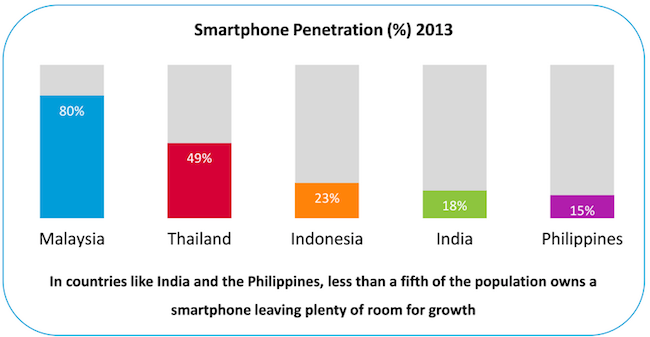 In comparison to the others, Indian smartphone users were highly engaged on music and spent the highest time on the genre across the five countries. Indians spent over 8 minutes daily on such apps, followed by Indonesia with 7 and Philippines with 5 minutes. Also, Indians along with Indonesians showed a preference for music apps over video apps, a preference that was reversed in the other three countries. 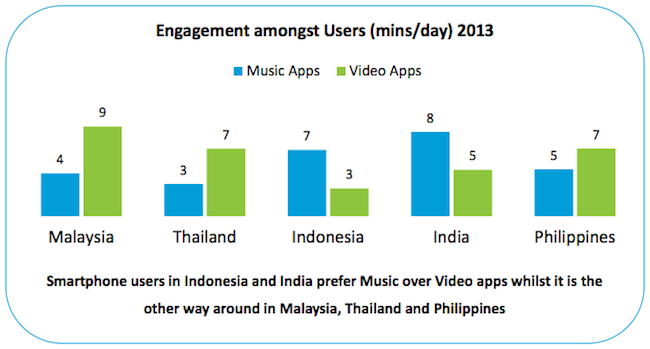 Malaysia ranked the highest when it came to engagement on video apps, with its users spending as much as 9 minutes daily on such apps. India came in fourth with 5 minutes, just ahead of Indonesia that came last with 3 minutes. 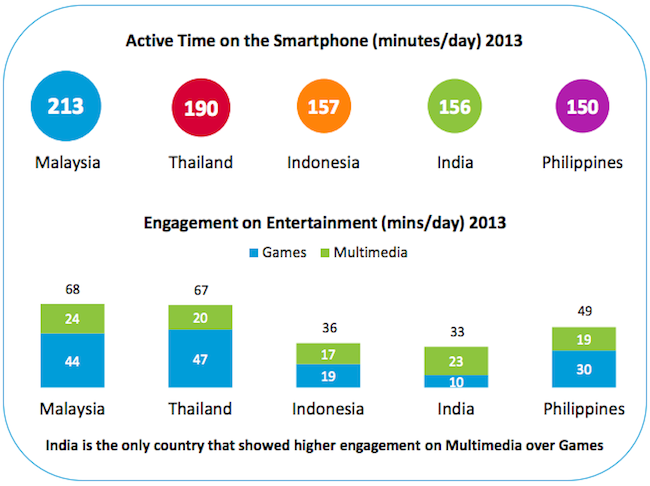 Thai smartphone users led the pack when it came to gaming as they spent over three quarters of an hour each day on games. With an overall device engagement time of over three hours a day, this constituted a quarter of total smartphone time on games.