India's overall tablet shipments for the second quarter of 2014 stood at 0.86 million units, recording a quarter on quarter increase of nine per cent over Q1 2014. The Indian market indicated early signs of recovery after taking a sharp hit in the past couple of quarters, according to a report by International Data Corporation (IDC).

"This recovery was fuelled by multiple factors. Business sentiments have shown improvement post elections and near term prospects are anticipated to remain better too. Furthermore, traditional PC original equipment manufacturers (OEMs) have started making big inroads in the tablet market and most of this success is led by leveraging their expanded reach through multiple distribution points," said Karan Thakkar, senior market analyst, IDC India.

"The combined share of PC OEMs in the Indian tablet market is expected to beat industry growth in the coming quarters," he added.

Android continues to be the most preferred operating system with 89.6 per cent market share. It is expected to sail above the 80 per cent mark over the next few years as well. Windows OS is gaining ground too, however, much of these volumes are currently being driven by the surge in enterprise buying. 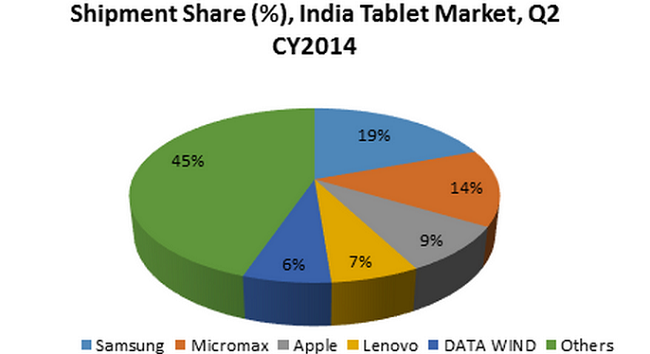 Samsung maintained its leadership position with 19 per cent market share in Q2, 2014. Majority of its volume is driven by sub $200 (Rs 12,085) voice calling tablets.

Strong performance in the quarter allowed home grown handset and tablet manufacturer Micromax to topple Apple to clinch the second spot. The vendor enjoyed 14 per cent market share in Q2, 2014.

Apple completed the top three with 9 per cent market share. More than 60 per cent of the overall iPad volume is being supported by their iPad mini offering that sports a 7.9 inch display.

The other prominent players included Lenovo and Datawind with seven and six per cent market share respectively.

According to Kiran Kumar, research manager, client devices, IDC India, improved discretionary spends by end users and festive buying is expected to drive growth in the tablet market in the coming quarters. "IDC anticipates this to be well supported by the optimism witnessed around enterprise IT spending in the recent past," he said.

Also, despite inconsistencies, smaller importers continue to remain successful in a highly price sensitive market and hence branded players should be cautious of any distractions.