After witnessing a strong growth in the festive third quarter, India's overall tablet shipments for the fourth quarter of 2014 stood at 0.96 million units, recording a quarter on quarter increase of 3.6 per cent over the previous quarter.

According to a report by International Data Corporation (IDC), strong performance of local players as well as increasing interest of the PC original equipment manufacturers (OEMs) in the tablets space contributed to the expansion of the market over Q3, 2014. The share of PC OEMs in the market has grown by more than double year-on-year.

"The market saw a correction post the introduction of Bureau of India Standards (BIS) regulation in July 2013. Unbranded tablets were wiped off from the market thereby contracting the bubble of growth witnessed in first half of 2013, and hence resulting in year-on-year decline in growth," said Tanvi Mann, market analyst, Client Devices IDC India.

"Consumers are driving the wave of adoption of low cost tablets as a preferred mobility solution. We are also witnessing a higher inclination of consumers towards online buying platforms and vendors are keeping up with the trend," added Kiran Kumar, research manager, Client Devices IDC India.

Interestingly, Wi-Fi enabled tablets have faced a steep decline over the quarters, losing out to connected tablets. According to the IDC report, the market is swiftly moving towards 3G connected tablets that posted a double digit growth in Q4, 2014 and accounted for approximately 60 per cent of the total shipments. Going forward, 4G tablets are expected to pick up as more service providers rollout their LTE spectrums by the second half of 2015.

In terms of screen size, 7 inch tablets in the less than $150 (Rs 9,339) price range populate the market as of now, and will continue to do so in the foreseeable future. While Android still has majority of the pie, vendors will also explore the 8-9 inch Windows form factor.

Home grown hardware manufacturer iBall rapidly climbed its way up to the number 1 spot in Q3, 2014, effectively dethroning market leader Samsung. From a 4.5 per cent share in Q4, 2013, the brand more than tripled its share to 15.6 per cent in Q4, 2014. The company's growth was backed by low cost products targeted at consumers looking to own entry level form factors.

Samsung slipped to the second spot with 12.9 per cent market share, as against a 17.9 per cent share in Q4, 2013. Local tablet vendors are posing stiff competition to the Korean giant at retail counters. 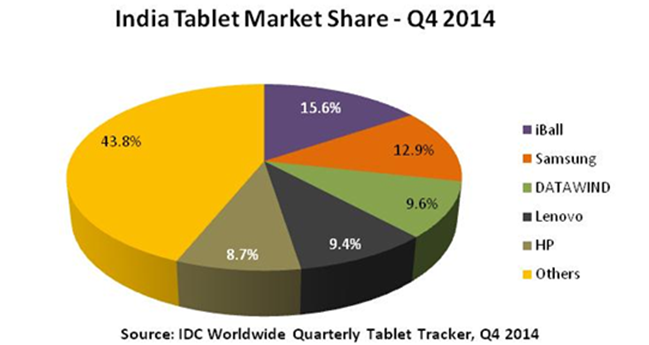 Datawind made it to the top three with 9.6 per cent market share. The brand- synonymous with the Akash tablet- is now focussed towards the consumer segment. Its low-priced products follow a unique channel of direct selling and TV/newspaper-led buying, targeting tier-2 and tier-3 cities. Lenovo and HP completed the top five with 9.4 and 8.7 per cent market share respectively.

IDC anticipates 2015 to kick start with large government and education projects feeding the commercial segment. The consumer space will continue to be led by the local brands and may also see the re-entry of some of the older players in the top five vendor list. On a yearly basis, 2015 is expected to post single digit growth over last year.