Mahindra First Choice Wheels Ltd (MFCWL), a multi-brand second-hand car sales venture operating through a hybrid offline-online model, has raised $15 million (around Rs 94 crore) from San Francisco-based investment advisory firm Valiant Capital for a minority stake in the company, according to a statement.

The company plans to use the fresh funds to accelerate growth and adopt technology enabled products and services used by its stakeholders—NBFCs, banks, OEMs, dealers and consumers.

It plans to wrap up the financial year ending March 31, 2015 with 500 franchise outlets and grow to more than 1,800 shops in five years. In addition, it plans to use the funds to broaden the reach for its products and services across other used vehicle categories.

This is the second round of private equity raised by MFCWL. In 2008, it had raised money from Phi Capital, which continues to be an investor in the company.

"We believe the brick and click ecosystem is very powerful in the used car business and over the years we have seen our consumers and dealers appreciate this value proposition. We will continue to invest in the overall growth of the hybrid model in the years to come," Rajeev Dubey, president (group HR, corporate services and after market), Mahindra & Mahindra, said. 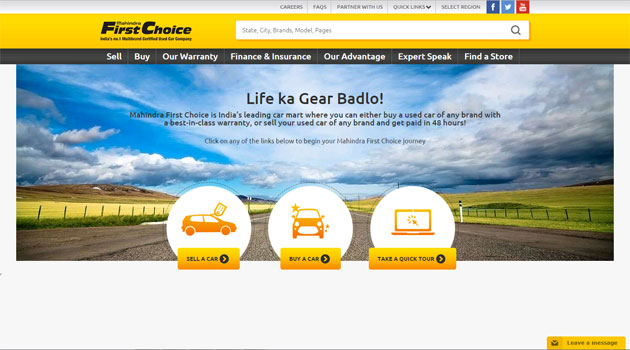 MFCWL expects to end FY15 with sales of 140,000 used vehicles between its retail and wholesale units. The used car market with an estimated size of 3.2 million units is larger than the new car market and is growing faster, the company said in the statement.