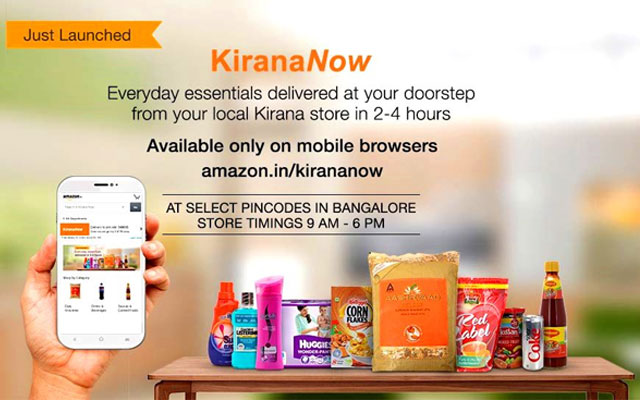 Global e-com giant Amazon, which runs an online marketplace in India, has launched an express delivery platform in partnership with mom-and-pop stores called 'KiranaNow'. It has launched the service in Bangalore on a pilot run before taking it to other cities in the country.

Notably this is an India-specific platform. In most other international markets, Amazon itself is the prime seller (though it also has other vendors) and operates like a conventional inventory-based e-com venture, a model it itself spread around the world.

"With this service we want to provide to our customers an instant and convenient access to their ecosystem of stores for their everyday needs right from their mobile phone. And likewise empower the Kirana stores with tools and technology to transform their growth in the digital economy," an Amazon India spokesperson told Techcircle.in.

The deliveries will be done via Amazon's own logistics unit Amazon Transportation Service Private Limited, besides delivery boys of kirana stores themselves as well as third party vendors.

The development was first reported by The Times of India.

Last year, Amazon had also roped in kirana stores or neighbourhood mom-and-pop retail stores to serve as pick-up and delivery points for products for its customer orders. In the US, Amazon offers such pick-up options as an alternative to home delivery through lockers placed in public areas.

Amazon spokesperson added that this independent pilot project it ran with kirana stores last year has since scaled to over 500 outlets across 20+ cities.

Meanwhile, the KiranaNow service has been launched only on the mobile browser platform and claims to deliver orders within two-four hours.

KiranaNow has been added to 'Shop by Department' on Amazon.in's mobile browser version. When chosen, the user is led to a page with various categories like daily cooking essentials, drinks and beverages, personal care, household supplies, etc. There is an option to sign up with Kirana Now.

Last we checked it threw a message saying: 'Sorry something went wrong. We are working on fixing it'. The products were also showing as currently unavailable.

To be fair, it is just the beginning and the firm says it is currently offering the service to select pincodes in Bangalore. Moreover, this is available only between 9AM and 6PM. Notably, this pitches Amazon against e-grocers like BigBasket, ZopNow and Godrej Nature's Basket (which recently acquired EkStop) as also express delivery service providers such as Grofers, which essentially picks products from local vendors to supply to consumers.

While some of its existing horizontal e-com peers eBay and Snapdeal also offer food products, they have restricted themselves to gourmet food items. Flipkart is yet to get into the food or grocery space.

In the US, the e-commerce giant has been operating AmazonFresh, an online grocery delivery service, since 2007. It offers home delivery of products on the same day or the next day and competes with Google Express and one of the hottest San Francisco-based startups Instacart.