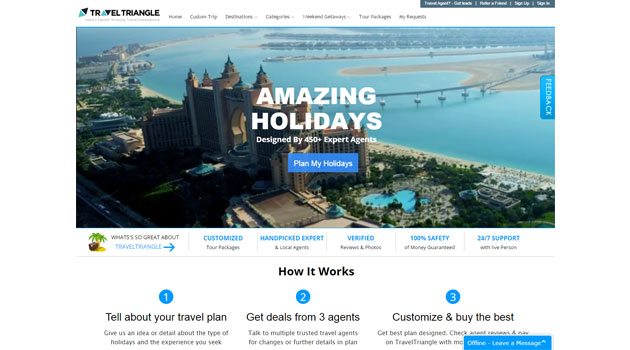 The round also saw participation from its existing investor SAIF Partners. Last July it had secured Rs 10 crore ($1.7 million) from SAIF Partners.

The Times of India, which first reported the news , said the company will use the funds to push its product, expand the set of destinations it offers and increase its team size to 500 people.

The platform enables customers to connect to multiple local travel agents, get quotations, customise their trips and book through the site directly. Users can also go through over reviews of agents written by other travellers. According to its site it has over 450 local travel agents spread over 35+ countries on its platform. It claims the firm has catered to over 1.5 lakh travellers in two years from 20+ countries and also has an office in the US.

Although the travel planning space is still dominated by online travel agents like MakeMyTrip, Cleartrip, Goibibo and Yatra, a string of new generation travel related startups have emerged with differentiated offerings. Some of the them also raised funding in the recent past.