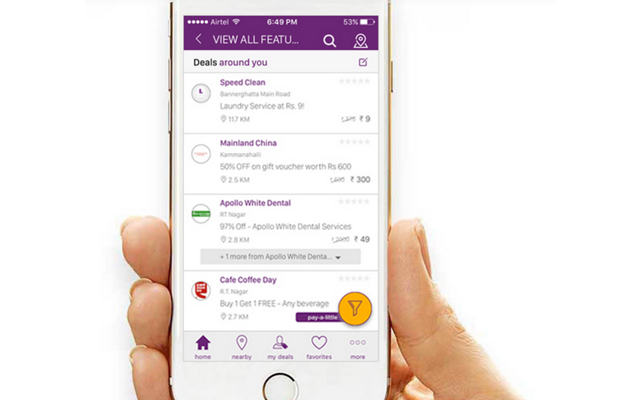 "Trideal has a large customer base and significant merchant database in Chandigarh. Hence, this acquisition fuels our expansion plans in Punjab," Chopra, CEO and co-founder of Bangalore-based Little, said in a statement.

As part of the acquisition, Trideal co-founders and its core team will join Little.

Trideal, run by Tri Innovations Pvt Ltd, offers deals across segments such as food and beverages, wellness and entertainment. The marketplace claims to have about 1,000 merchants on its platform. It operates in Chandigarh and Mohali, Punjab, and claims to get about 7,000 visitors for its merchant partners.

"Our customers will now get access to Little's merchant and deals database. This will also provide a significant boost in business for our merchants," said Sameer Sharma, CEO and co-founder of Trideal.

Little is a mobile marketplace for deals related to offline merchants. It covers restaurants, movies, hotels, salons, gyms, spas and other services. It has more than 8,000 merchants on board who dole out 27,000 live deals on its platform.

The deal comes months after Little raised $50 million (Rs 318 crore) in July from One97Communications, which runs mobile commerce venture Paytm, SAIF Partners and Tiger Global Management, among others. As part of the funding, Little will power the deals platform on Paytm.