In order to manage it diverse businesses that include e-commerce, mobile payments, logistics and two fashion portals, Flipkart has restructured its management team with Binny Bansal spearheading various functions as Group CEO.

According to people close to the development, a leadership team has been constituted at the country's largest e-commerce company to lead the aforesaid divisions of the now called "Flipkart Group". Under the new arrangement, Kalyan Krishnamurthy and Saikiran Krishnamurthy will run the group's commerce business. While Kalyan, who is a representative of Tiger Global, the largest investor in Flipkart, will be leading the main marketplace, retail and advertising business, Saikiran will be leading the logistics business as the head of Ekart that manages the supply side of the marketplace.

Krishnamurthy had first joined Flipkart in 2013 and held the roles of interim chief financial officer initially and categories head thereafter during the stint that ended in November 2014. He then joined Tiger Global as a managing director.

As a part of the overhaul, chief people officer Nitin Seth has been redesignated chief administrative office, and advertising head Ravi Garikipati will now become head of engineering. Seth will overlook strategy, planning, and analytics as well.

All four appointees will report to Bansal. The development was first reported by Mint newspaper.

In addition to these four, Ananth Narayanan, CEO of fashion portals Myntra and the newly acquired platform Jabong, and Sameer Nigam, who heads PhonePe, the payments division of the e-commerce company, will also report to Bansal. 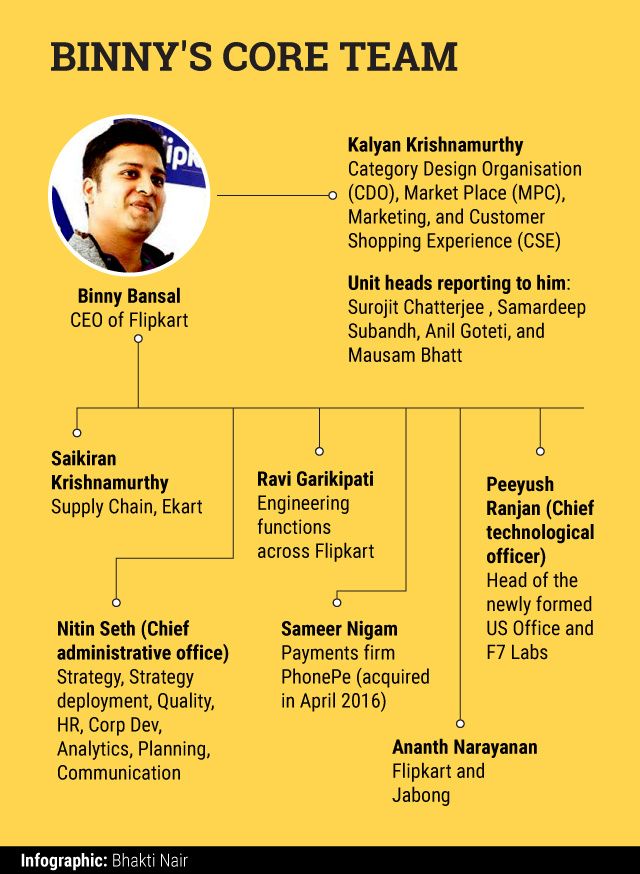 Bansal took over as Flipkart's CEO five months ago and now, the company is trying to streamline the reporting functions in order to ensure a nimble set-up as it tries to go back to the inventory-based model against the marketplace it tried to become last year. Besides the leadership, the second deck of the organisation is also being restructured, people quoted above said.

"To simplify the Commerce business, a number of functions will be consolidated under Kalyan. Category design organisation (CDO), marketplace (MPC), marketing, and customer shopping experience (CSE) organisations will now be part of commerce business structure led by Kalyan," said one of the persons cited above.

Emailed query sent to Flipkart did not elicit any response.

The hurried efforts to streamline the company structures come at a time when its rival Amazon is closing in on the gap in gross sales and making serious efforts to claim leadership in the Indian e-commerce market where Flipkart has been the leader.

Flipkart recently also revamped its technology leadership team, the second such restructuring this year in the tech vertical. As a part of the move, it named engineering head Peeyush Ranjan as group chief technology officer, and appointed former CTO of Micromax Informatics Ltd, Ashish Agrawal, as senior vice president of engineering.