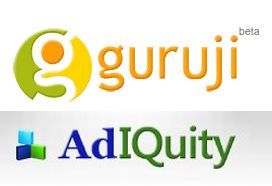 Bangalore-based startup Guruji.com Software Pvt. Ltd, which began as a local search engine Guruji.com and then attempted a music search (which it had to shut down), has now forayed into mobile advertising.

"The last few months have seen hundreds of publishers signing up with Adiquity and realizing increased monetary gains through the platform. The publisher base has shown phenomenal growth both in terms of volumes and diversity of mobile users. Our high performance mobile platform can scale upto 10X of the current volume with the existing infrastructure," said Anurag Dod - CEO, Guruji.com, in a statement.

This launch comes at a time when various domestic ad networks are present and competing for their share of the yet to mature mobile advertising market.

Another mobile ad network InMobi noted that the domestic mobile advertising market for the company grew by 27% to 1.5 billion impressions between October 2010 and January 2011.