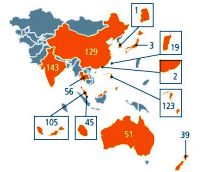 According to the State Of The Internet report by Akamai Technologies, Philippines and China have an average connection speed of 1 Mbps while Malaysia tops them at 1.3 Mbps. The average Singaporean enjoys 3.1 Mbps speeds.

South Korea has the highest average connection speed of 13.7 Mbps, followed by Hong Kong with 9.4 Mbps and Japan with 8.3 Mbps. These are classified as "high broadband" as it crosses the 5 Mbps threshold. Year-over-year trends in the APAC region were positive, with the biggest increase seen in Australia, which ended 2010 with an average connection speed 35% higher than at the end of 2009. 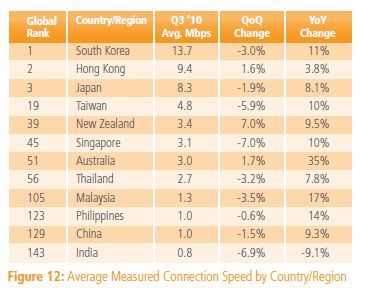 The average peak connection speed increased to 5.1 MBps in India on an annual basis.