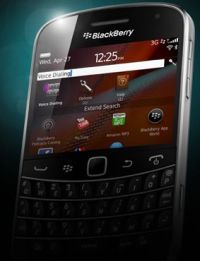 The new BlackBerry 7 operating system will work on BlackBerry Bold 9900 and BlackBerry Bold 9930 and has features galore. RIM said that its revamped mobile OS is a "performance driven" platform and has a revamped BlackBerry browser that includes a just-in-time JavaScript compiler and HTML 5 video support. BlackBerry 7 OS will also support augmented reality applications, have voice-enabled search and have NFC (near field communications) short-range high-frequency wireless communication technology for contactless credit card payments. Other Handsets which have NFC currently are the Samsung's Google Nexus S and Galaxy S2.

To know more about Augmented Reality, read this post.

The two new handsets are essentially the same but the Bold 9900 supports High Speed Packet Access(HSPA)+ connectivity, while the Bold 9930 is an international device supporting CDMA and GSM networks.

The new Bolds and the BlackBerry 7 OS will be launched this summer, but unfortunately the current devices won't be upgradeable to the new OS due to hardware restrictions according to RIM. This is a major drawback since all the Blackberrys purchased recently will become outdated.

Here is a video of the Blackberry handsets, courtesy Crackberry.

The BlackBerry devices run on Qualcomm's 1.2GHz Snapdragon processor; have 768MB of RAM and 8GB of internal storage which can be extended up to 32GB with a MicroSD card. The mobiles have a 5 mega pixel camera with Flash which can also record High Definition videos at 720p, a feature absent in earlier models of BlackBerry.

They have a 2.8 inch capacitive touchscreen featuring RIM's Liquid Graphics technology and a pixel density of 287 dpi, track pads and full QWERTY keypads and are the thinnest BlackBerry smartphones till date at a mere 10.5mm width. They come with a brushed stainless-steel surround and a high-gloss glass-weave back plate. The inclusion of touch screens means you can use both the track pad and the screen for the functioning of the device.