3D Phones By HTC And LG: Get Set For A Glasses-Free 3D Experience 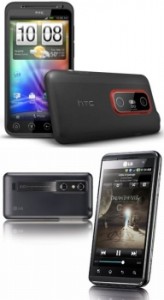 Both HTC and LG had long announced their 3D phones- the HTC EVO 3D and LG's Optimus 3D but there was no launch date provided for India. These phones will finally be launched this year. Here's a look at their specifications:

The HTC EVO 3D is powered by a 1.2 GHz Qualcomm MSM8660 dual-core processor on the Snapdragon chipset with an Adreno 220 GPU and runs on Android 2.3 Gingerbread operating system with HTC Sense. It has a 4.3 inch Super LCD 540x960 QHD resolution 3D display, a 1GB RAM and 4GB of internal memory, which is expandable up to 32GB. Surely, the most exciting feature is the phone's ability to capture and playback 3D photos and videos.

You can have a look at EVO 3D here, courtesy Phonedog

LG's Optimus 3D also has a 4.3-inch 3D LCD capacitive touch screen with 16million colours and 480x800 pixel resolution. It comes with a 1GHz dual-core ARM Cortex-A9 processor, which runs on the TI OMAP4430 chipset and features a PowerVR SGX540 graphics processing unit (GPU). It has Android operating system v2.2 Froyo (upgradable to v2.3 Gingerbread) and uses the LG 3D user interface. The internal memory of 8GB is expandable up to 32GB.

The Optimus 3D also has Dual 5 mega pixel auto focus cameras with LED flash for 3D capture; 5 mega pixel camera for 2D capture. According to LG's press release the LG Optimus 3D provides the world's first full 3D experience covering the full spectrum from recording to viewing and sharing 3D content. It features a dual-lens camera that enables users to capture any moment in true 3D, which can then be viewed immediately on the 4.3-inch WVGA glasses-free display.

According to EzineMark.com the Optimus 3D will launch in India in May and will cost around Rs.25,000. The prices of HTC EVO are not available at the moment.

Spice had launched a 3D phone earlier in India called M-67 3D for just Rs.4,299. But this phone only had a 3D screen and did not have the ability to capture 3D pictures and videos.