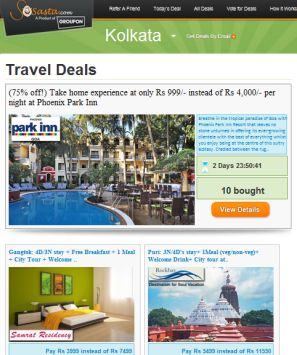 Sosasta.com currently serves users in 11 cities in India and features a daily deal on the best stuff to do, see, eat, and buy.

"We look forward to featuring world-class merchants in the travel industry, mitigating the pinch of expensive travel. Users of Groupon India will find the perfect deals to build a vacation, whether within India or across the globe," said Ananya Bubna, MD, Groupon India, in a media release.

The travel deals will be live on a nation-wide basis and will change daily. Deals have an expiry date for redemption. Users can purchase vouchers and redeem them on visiting the destination.

Groupon.com was launched in 2008, and is headquartered in Chicago, USA. Read about how it entered India and its strategy for the year on Techcircle.in.

Now, Groupon India is shifting its centre of operations from Kolkata to Bangalore. It has operations in Chennai, Delhi, Mumbai, Kolkata and Pune.