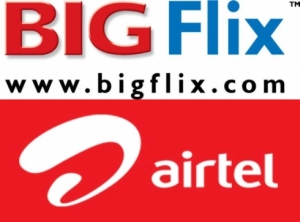 Bharti Airtel has announced the launch of Airtel movies, a digital video service that is online and on-demand, in alliance with BigFlix, the home entertainment division of Reliance Anil Dhirubhai Ambani (ADA) Group.

Airtel broadband customers can avail the Airtel movies service as a monthly add-on pack. The service will provide the customers with an online digital video library with DVD quality content that can be accessed on Wi-Fi. The customers can use their computers, laptops or tablets at home to get access to 500 movies, 100 TV shows, 100 trailers and 100 music videos. New videos will also be added to the available data in the future. Currently there is only one plan available, it costs Rs.229 per month and allows the subscribers unlimited access.

"The launch of Airtel Movies powered by BigFlix will allow consumers to watch movies and TV shows of their choice sitting in their homes through their Airtel broadband connection that is free of advertisements," said Manish Agarwal, Chief Executive Officer, Reliance Entertainment Digital.

The biggest drawback of the service is the content available as of now, most of the popular TV shows are not available and additionally the Hollywood movies collection is also poor. Airtel and Bigflix will have to drastically improve on the available content if they plan to attract customers.

The company had also launched a new service called Airtel broadband TV (accessed at Airtellive.com), that allowed customers to watch live television on their laptops.