10.57 Million Mobile Users Opt For MNP In May: TRAI

By the end of May 2011, around 1.05 crore mobile subscribers had submitted their requests to different service providers for porting their mobile number. This number increased by 20.29 lakh from 85.41 lakh in April according to a release by TRAI. The most number of MNP requests came from the Gujarat state followed by Rajasthan.

Here is a table showing the wireless subscriber base of the top providers in May, 2011 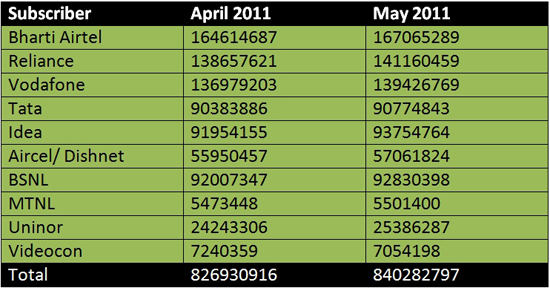 Private operators dominated the wireless market with 88.30 per cent market share. Bharti ruled the market during the month of May 2011 with more than 16.4 crore subscribers (19.88 per cent); Reliance came second followed closely by Vodafone. Idea, Tata and Aircel and public service undertaking (PSU) BSNL were the other big players.

Unlike the wireless segment, the wire-line segment's subscriber base saw a decline from 34.55 million in April 2011 to 34.40 million at the end of May 2011, clearly showing a shift from wire-line to the wireless. The share of urban subscribers increased while the share of rural subscribers declined.

The wire-line segment was completely dominated by PSU operators in the month of May, 2011 with 82.29 per cent market share. BSNL dominated the market with more than 2.5 crore subscribers (72.27 per cent) while MTNL came second followed closely by Bharti. Tata and Reliance were the other big players.