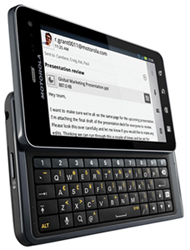 Motorola has announced its latest offering in the Droid series of smart phones called Droid 3. The new mobile phone will be available from July 14 in the US market and is priced at $199.99 (around Rs.9,000) under a new two-year contract with Verizon Wireless. The consumers can also buy an unlocked version of the mobile phone for a price of $459.99 (Rs.20,500).

Droid 3 has the Android 2.3 (Gingerbread) operating system, although the OS is upgradable to Ice Cream Sandwich (the next Android update). It runs on a dual-core 1Ghz Texas Instrument OMAP 4430 processor, has 512MB of RAM and 16GB of internal storage (an improvement from 8GB in Droid 2) that is expandable up to 32GB.

The screen size and resolution has also been improved in Droid 3 and unlike its predecessor (which had a 3.7 inch screen with 480 x 854 pixels resolution), Droid 3 has a 4 inch qHD capacitive touchscreen display with 16 million colours and 540 x 960 pixels resolution. Additionally the new device has a 5 row QWERTY keyboard (Droid 2 only had a 4 row QWERTY keyboard) and the company claims that DROID 3 is the world's thinnest full QWERTY smartphone.

Droid 3 has an 8 mega pixels rear camera with LED flash and 8x digital zoom and can record high definition (1080p) videos at 30fps. It also has a front facing camera for video calling. Although the phone comes in a CDMA version, it is capable of supporting and working on GSM networks as well.

The device has Adobe Flash player 10, its dimensions are 124mm x 64mm x 13mm and it weighs at 167 grams. The mobile phone also has an HDMI 1.3 port that allows output to other HD displays.

The Indian price and launch date has not yet been confirmed by the company, but if you happen to have a relative or a friend in the US, you can ask them to get an unlocked version of the mobile phone for you.