Digital Content Consumption In India May Touch $9.5B By 2015: McKinsey 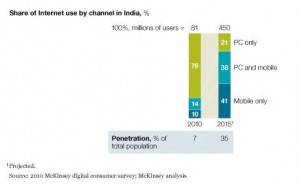 The Indian internet user base could touch 450 million by 2015 from the 2010 estimates of about 81 million and digital-content consumption can rise as high as $9.5 billion with rising adoption of mobile internet, according to a recent report from a management consultancy firm McKinsey.

An abysmal 7 per cent in the country (81 million) had access to the internet, compared with 32 percent in China and 77 percent in the United States in 2010.

Indian consumers however have a remarkable appetite for digital content offline. In fact, they consume an average of 4.5 hours of it daily across offline channels such as television, DVDs, and CDs. However, this is all set to change and India will become the first truly mobile digital society with all the elements in place the cost of network access and handsets is going down, wireless networks being upgraded and Indian consumers already displaying an insatiable appetite for digital services, the report notes.

Here's an excerpt from the article which argues why India may be on the way towards the mobile Internet revolution.

"There's enough development in devices, networks, operating systems, and operator strategies to suggest that India is on track to resolving These Terms of Service apply when you interact digitally with the Internet sites operated by NBCUniversal Media, LLC and its affiliates and subsidi aries horoscope ( NBCUniversal or We, Our or Us), (the Site or Sites), games, interactive TV, and any other services, products and any related software or mobile and/or tablet applications offered by NBCUniversal (collectively online services or services). the challenge of affordable, easy Internet access. The average price of smart phones that deliver much richer content, including video, is falling rapidly—already nearing $125, significantly less than the cost of PCs. Mobile devices also are inherently easier to operate than PCs, and the ability to access Web sites with a single touch or a voice command (critical given India's high illiteracy rate) is becoming a reality. Finally, Indian operators are starting to offer innovative rate plans for mobile data use, addressing criticisms of the prices of data plans and their perceived opaqueness. Cheaper, easier access for all is on the cards."

The report also says that the first step toward generating more profits from content and services is the creation of offerings that are compelling and easy to access and use, much like iPhone applications. More local-language content also is required, and it should be presented in new ways: voice and single-touch mobile-Internet access are essential, particularly to overcome illiteracy and a lack of familiarity with the Internet.

In order to sustain the growth and generate revenues for mobile companies, selling regional and local advertising on mobile devices is essential: it's the fastest-growing form of advertising in India, and there's a desperate need for local content, given the country's 23 official languages, Mc Kinsey said.

India is the fastest growing cellphone market in the world with more than 598.77 million GSM subscribers. India has added 8.58 million new GSM connections during June, according to the data released by the Cellular Operators Association of India (COAI).