Technology giant Google has expanded the calling facility from Gmail (which enables users to call any mobile or landline) to several countries outside the US by offering calling facility in 38 new languages. Last year the company had rolled out the service exclusively for users in the US.

Calling credits can be bought in four different currencies like Euros, British pounds, Canadian dollars or US dollars and since there are no connection fees, users will only have to pay for the duration of their conversation.

The call rates have been reduced further to attract potential users and calls can be made to over 150 destinations around the world. For example, calling mobile phones in the UK will only cost the caller $0.10 (around Rs.4.4) per minute while calls to the U.S. or Canada placed from outside these countries will be charged $0.01 (around 44 paise which is just a shade higher than what it costs to call a local number within India) per minute and $0.02 (around Re 1) per minute will be charged for calling any phone number in China and India. The complete list is available here. 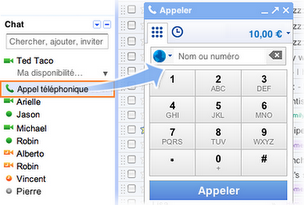 The feature will be rolled out in other countries over the next few days so if it is made available in India, users here will see a little green phone icon show up at the top of the Gmail chat list (but you will have to install the 'voice and video plug-in' if you don't have it already). Although if you are using Google Apps, the domain administrator will have to enable Google Voice and Google Checkout from the control panel so that you can use this feature.

Calls to the US or Canada placed within those countries will continue to remain free of cost, at least till the end of this year.

Skype has a similar calling service, but the call costs in Skype are higher, for example, it charges $0.18 to $0.25 (around Rs.8.1 to Rs.11.25) per minute for calls to UK mobile numbers in comparison to Gmail's $0.10 (Rs.4.5) price. But since Google has slashed its calling costs, maybe Skype will have to do the same so as to effectively compete with them.