By the end of June 2011, around 1.3 crore mobile subscribers had submitted requests to switch their service provider while retaining their phone numbers. As many as 25 lakh people opted for mobile number portability (MNP) in the month of June itself, according to telecom regulatory authority of India (TRAI). The most number of MNP requests came from the state of Gujarat state (for the second successive month) followed by Maharasthra.

Here is a table showing the wireless subscriber base (and net additions) of the top providers in June, 2011. 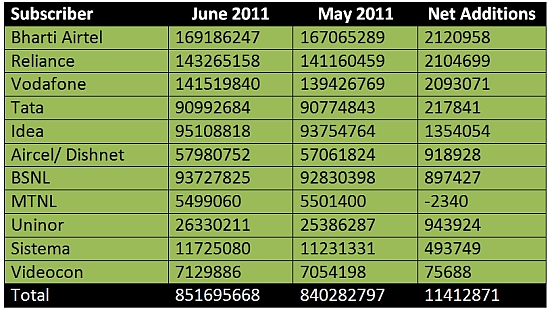 The proportion of VLR subscribers was approximately 69.83 per cent of the total wireless subscriber base reported by the service providers (a drop from 69.99 per cent recorded in May 2011). Telecom operator Idea lead the tally with 92.48 per cent of VLR subscribers as opposed to total number of subscribers, followed by Bharti Airtel with 88.77 per cent; Etisalat was at the bottom (replacing MTNL) with just 34.84 per cent which means just around one in three subscribers to Etisalat are active.

Private operators dominated the wireless market with 88.35 per cent market share. Bharti Airtel continued as the top player during the month of June 2011 with more than 16.9 crore subscribers (19.86 per cent of the total wireless market share); Reliance came second (16.82 per cent) followed closely by Vodafone (16.62 per cent). Idea, Tata and Aircel and state owned firm BSNL were the other big players while MTNL was the only prominent operator that saw a decline in its subscriber base (which could be due to MNP) in the month of June 2011.

Unlike the wireless segment, the wire-line segment's subscriber base saw a decline from 34.40 million in May 2011 to 34.29 million at the end of June 2011, showing a shift from wire-line to the wireless. The share of urban subscribers increased while the share of rural subscribers declined.

The wire-line segment was completely dominated by PSU operators in the month of June, 2011 with 82.14 per cent market share. BSNL dominated the market with more than 2.47 crore subscribers (72.10 per cent) while MTNL came second followed closely by Bharti. Tata and Reliance were the other big players.