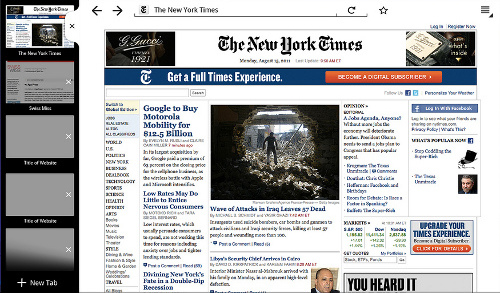 It is priced at Rs 22,990 and will be available for online purchase from September 15, followed by electronic store launches. A car kit and an 8GB SD card will be provided free of cost with the device.

The device also comes pre-installed with Aura, MapmyIndia's latest navigation interface (with full 3D navigation and detailed maps of India that include house numbers, as well as city and travel guides).

Rakesh Verma, Managing Director, MapmyIndia, said, "The strategic collaboration with Qualcomm for CarPad is the first big step in our endeavour to converge cars, consumers and connectivity in India and introduce connected services inside the car."

The device can connect to the internet via in built 3G and Wi-Fi and the users can stream photographs of places they visit or share their location with others. They can also make calls (it has SIM card facility), message, mail and chat with their friends.

The maps available in the device include over 5 million places, national-level maps for 5,79,000 towns and villages, street-level maps for 1200 cities, house-level maps for 18 cities and 3D landmarks and building footprints for major cities in India.

Additionally, the device has a mini USB slot, a Micro SD slot (supports expansion up to 32GB) and has a 2 mega pixel camera that also allows video recording.  It has a 3400 mAh battery and the company claims that it will offer more than 7 hours of talk time and stand by time of 420 hours. The dimensions of the device are 198 x 122 x 13.2 mm.

"CarPad is the first 3G device optimised for navigation and in-car use, based on the Snapdragon S1 processor. It combines fast processing capabilities, 3G connectivity and rich multimedia," said Avneesh Agrawal, Senior Vice President of Qualcomm and President of Qualcomm India and South Asia.

Although the device is a handy one, the pricing can become the deciding factor on whether it is accepted by consumers or not. The features of the tablet distinguish it from the other GPS devices available in the market to the point that it can also be considered a mainstream tablet.

But that is where the problem lies; it is too costly to be just a GPS device (SatGuide offers cheaper alternatives for around Rs 7,000) and it doesn't pack enough power to take on the likes of Apple and Samsung. Also, some Samsung tablets offer MapmyIndia's navigation software pre-loaded, so the question remains whether people will spend money on such a device.