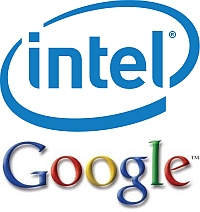 Intel Corporation has announced a partnership with Google that aims to accelerate Intel's business in the smartphone market. The two companies have outlined plans to enable and optimize future releases of the Android platform for Intel's family of low power Intel Atom processors. The joint effort is designed to speed time-to-market of Intel technology based smartphones running the Android platform.

Intel's President and CEO, Paul Otellini, made the announcement during the opening keynote of the Intel Developer Forum in San Francisco. "Our collaboration with Google will help accelerate industry innovation, adoption and choice. It will enable our customers (other companies) to bring exciting new products and user experiences to the market that harness the combined potential of Intel architecture and the Android platform."

Intel wants to grow its business in adjacent computing market segments and for the same they have increased their efforts to accelerate their smartphone business. This could be the sensible thing to do since everyone is aware that sales of PCs are slowing down these days with the coming of tablets and power packed smartphones.

Also, although Intel is the leader in the PC microprocessors segment, it is yet to cement its place when it comes to mobile phones and tablets. This move can pave way for their stronghold in these markets since Google's Android software is one of the biggest (and one of the best too) player in the smartphone software segment, much ahead of Microsoft and RIM.

He also predicted that platform power innovation will reach new levels in the near future. Already Intel's researchers have created a chip that could allow a computer to power up on a solar cell the size of a postage stamp. Referred to as a "Near Threshold Voltage Core," this Intel architecture research chip pushes the limits of transistor technology to tune power use to extremely low levels.

What does the partnership mean for consumers?

Intel is the world's largest semiconductor chip maker (based on revenue) and is responsible for the processors found in most personal computers today. Also, Android's success as one of the leading mobile operating systems available today is no secret either. The partnership between the two companies can only mean better, faster and lighter mobile phones in the future that will take the mobile experience of users across the globe to the next level.

Indian users can expect to see some interesting mobile phone launches that will incorporate Intel's processors and the Android OS. Additionally, since Google has acquired Motorola Mobility, don't be surprised if the first mobile phone to have them comes from Motorola. The first phones featuring Google chips should hit the market by mid 2012.