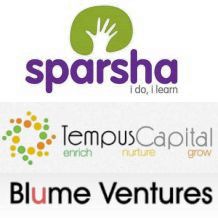 The proceeds of the funds would be used for further product development, including courses for other streams and subjects, both technical and non-technical, Debabrata Bagchi, co-founder and CEO of Sparsha told VCCircle.

Blume Ventures and Tempus Capital would also share a board seat on a rotating basis, he added.

"Product licensing is done on per course/per student basis. We have now tied up with eight colleges in India and plan to add a few more during this fiscal," added Bagchi.

The education sector has seen an increasing interest from PE players, with investments of $190 million across 23 deals in 2010, as compared to 10 deals worth $128 million in 2009, according to VCCedge, the financial research platform of VCCircle.

There are several education-focused PE funds, as well as generic growth capital funds, who are now eyeing this space. For instance, Kaizen Private Equity, which is raising a $100 million fund for the sector, has secured funding from HDFC, India's largest mortgage lender, and World Bank body International Finance Corporation (IFC). Another player is Milestone Religare, with dual focus on education and healthcare.