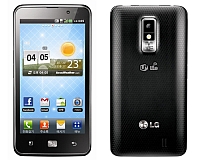 4G is basically the fourth generation of cellular wireless standards after 2G and 3G and offers much faster data transmission (among other things) than any of its predecessors. While 3G speeds currently max out at 14Mbps (for downlink), with 4G speeds up to 100Mbps (for moving user) and 1Gbps (for stationary user) can be achieved. Other 4G mobile phones currently available include HTC EVO 4G, Samsung Galaxy S II LTE and HTC Thunderbolt among others.

Since Indian telco's are still in the mode of launching 3G services in the country, don't expect to get your hands on this phone anytime soon. Indian carriers are unlikely to launch 4G services in the near future, so even if you manage to get one of these devices, you may not be able to play around much at super fast speeds.

The mobile phone runs on the Android 2.3 (Gingerbread) operating system and is powered by a 1.5GHz Scorpion dual-core processor. It has 1GB of RAM and comes with 4GB of internal memory that is expandable up to 32GB with a microSD card.

Additionally, the handset has an 8 mega pixels auto-focus rear camera with LED flash that can record full HD videos (1080p) and a 1.3 mega pixels front facing camera. It also has an HDMI port and supports DLNA, which enables file sharing between other DLNA devices like TVs. The mobile phone comes with a stereo FM radio, has Bluetooth and Wi-Fi and comes with a 1,830 mAh battery.

Also Intertek, an international product testing and certification agency, recently pointed out in a report that IPS displays perform better than AMOLED in areas of colour accuracy, brightness, battery efficiency and performance, therefore making the True HD IPS display better than most of the displays offered on mobile phones today.

As of now, there is no news available about Optimus LTE's launch outside Korea. But keep track of this space for more on the same.