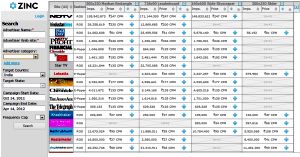 After commercially launching its ad exchange platform in India, US-based Zedo Inc., which offers advertisement technology solutions to global publishers, is now spinning it out into a separate company called Zinc India Pvt Ltd, to be headquartered in Mumbai.

Discussing his plans for Zinc in India, Zedo co-founder and CEO Roy de Souza said that he would strategically partner with an ad agency for the firm where the agency will be a stakeholder. Zedo will hire a team of 20 and a CEO to run its India unit, which is expected to have 200 people on board in the next 3-5 years.

Going ahead, the key focus areas for Zedo will be to create new ad formats for Tablets and foray into the mobile advertisement market. It also plans to set up joint ventures in APAC for Zinc, said de Souza.

Zedo is an online ad serving firm and competes with global leaders like Google's DoubleClick and Tribal Fusion in the US. In 2000, the company had set up operations in Mumbai for software development and product engineering, as well as customer service. Today, the company employs 240 people across its three centres (Mumbai, Pune and Goa) and a sales office (Delhi).

Zinc is a self-service platform for ad agencies and media-buying firms where they can browse, search and purchase advertisement slots on top websites in India. According to de Souza, it works very much like an e-commerce site. Zinc has been positioned as a premium ad exchange network and features top media houses such as Hindustan Times, NDTV, Mid-Day, Financial Chronicle, Loksatta, Deccan Chronicle, UTV, Malayala Manorama, Dainik Bhaskar, Aaj Tak, Business World, Dinamalar and India Today. Currently, it has around 50 live Indian media sites for ad inventory and this is expected to double in the next 3-5 years. Zinc has also signed contracts with five Indian ad agencies that will use the platform for their online campaigns.

There is a plethora of ad networks in India such as Network Play, Komli Media, Jivox, Vdopia, Smile Group's Tyroo, Media Estate, IndiAds and AdsForIndians, Guruji's mobile ad platform Adiquity, Online Media Group and Affinity. But de Souza believes that an online exchange is the flavour of the season. "Zinc offers technology that allows advertisers to directly view actual prices and inventory of ad slots from the publishers. Advertisers can easily manage their campaigns, compare pricing and create their media campaigns online. It is faster and more transparent," he added.

Recently, Komli Media and Jivox entered into an exclusive partnership for video advertising to increase the reach of Jivox's video advertising platform to Australia, South-East Asia, the Middle East and Africa.