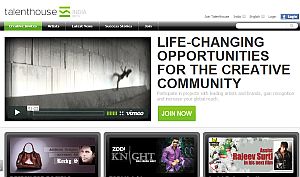 Reliance Entertainment, which is into film production, digital gaming, video on demand and e-commerce as well as other new media initiatives and is a part of the conglomerate Reliance Anil Dhirubhai Ambani Group (ADAG), has made a strategic investment in California-based Talenthouse, an online platform for artists.

The two firms have also formed a joint venture called Talenthouse India. However, the company refused to disclose the financial transactions involved.

Talenthouse India will be a hub for Reliance Entertainment's digital business based out of Mumbai and will oversee growth and business in India and Southeast Asia. Arun Mehra, the chief marketing officer of Zapak Digital Entertainment Ltd, has been appointed CEO of the joint venture.

In India, Talenthouse already has a user base of over 10,000 artists and associations with approximately 350 creative schools. Talenthouse will now connect with Indian and Asian artists across film, fashion, music, photography and art on collaborative projects. It claims to have associated with artists like Paul McCartney, Lady Gaga, Maroon 5, Justin Timberlake, Rihanna, Naomi Campbell, Rod Stewart, Queen and Kylie Minogue, among other popular musicians, to identify and provide a platform for fresh talent. The company has offices in Palo Alto, Los Angeles, New York and London.

"Talenthouse will change the dynamics of the Indian entertainment industry. It will help identify and leverage fresh talent from across the nation in various creative fields. It will also provide a great opportunity to brands to churn out innovative and creative brand solutions," said Rohit Sharma, chief executive officer, Reliance Entertainment (digital business). Reliance Entertainment is present across film production, distribution and exhibition besides gaming (Zapak, Jump Games), video on demand (BigFLIX) and more recently, e-commerce. Its parent company, Reliance ADAG, also has key interests in broadcasting and new media ventures.

The Reliance-Talenthouse joint venture has also joined hands with Metallica and F1Rocks to hunt for a rock band to play alongside Metallica when the band performs in India later this month.

Other similar ventures in this space are ArtistAloud.com, by Hungama Digital Media Entertainment Ltd, Hoonur.com by Balaji Telefilms and Hitlab.com, which is backed by poultry major Venkateshwara Hatcheries Group (called Venky's). In July, ArtistAloud.com tied up with record label Universal Music Group India to extend its reach and promote and popularise independent Indian music across the globe.