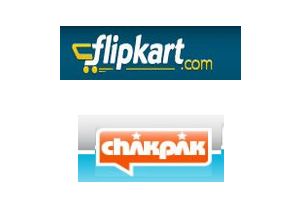 After acquiring book recommendation engine WeRead by Lulu and digital music firm Mallers, Inc., Flipkart Online Services Pvt Ltd might be making yet another acquisition. Techcircle.in has learnt that Flipkart is in discussions to acquire Chakpak.com, a Bollywood news portal backed by Accel Partners and Canaan Partners.

Chakpak.com offers news, updates, photos and videos of Bollywood celebrities. Founded in 2007 by Gaurav Singh Kushwaha and Nitin Rajput, Bangalore-based Chakpak Media raised its seed round of funding from Erasmic Ventures (which is now Accel Partners India), and its second round from Canaan Partners and Accel Partners India in December 2008.

Accel Partners' Subrata Mitra, who is on the board of both Flipkart and Chakpak, declined to comment on the acquisition.

The site had five million unique visitors per month as of 2008 but not much has been heard from it since. In fact, there have been no updates on its Twitter handle and Facebook page since June 2011. The site is being monetised through advertising but plans to add more revenue streams â€“ through merchandising and paid downloads of movies â€“ do not appear to have taken off. Chakpak competes with various other Bollywood portals such as Bollywood Hungama by Hungama Digital Entertainment, Santabanta.com, Galatta.com, IBN Live's movie channel (previously Buzz18), E24Bollywood and MyPopKorn by Digital Media Convergence Ltd.

Flipkart is one of India's fastest growing e-commerce sites, selling books, handsets, consumer electronics, movie DVDs, etc. After raising a total of $31 million so far from Tiger Global Management LLC and Accel Partners, the company is now looking to acquire firms to complement its current service offerings. It is also raising between $150 million and $200 million from private equity firms Carlyle and General Atlantic, according to a Reuters report. Flipkart expects to cross $100 million in revenue this year.

While some say that Accel Partners, who also backs Flipkart, might be behind this acquisition, others in the industry believe that Flipkart may have a long-term strategy to build a digital entertainment business, leveraging synergies of its acquisitions. Flipkart is also building an online music store on the lines of Mallers' Manoramic.com, which was shut down last year. The company is also investing in scaling up its music CD and DVD store with the help of Mallers' team. With a community revolving around music and movies, an entertainment foray via the acquisition of a site like Chakpak.com can supplement its existing e-commerce business.