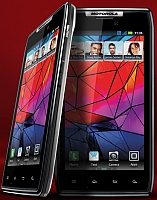 Motorola Mobility appears all set to launch its latest smartphone called Motorola 'RAZR' in the Indian market this month, as per rumours doing the rounds.

The company claims that the mobile phone is one of the thinnest smartphones available as of now (only 7.1mm thick as against Galaxy Nexus's 8.9mm and iPhone 4S's 9.3mm thickness), and if the 4G LTE version of the device is launched, it will also be the first Android smartphone to support 4G LTE in the Indian market, although it is likely that the company will simply launch the 3G version in India to begin with since there are no 4G networks at present in the country.

The price of the device in the US with an operator contract is $300 (around Rs 15,000), but it should be priced in access of Rs 30,000 when it is launched in India as a standalone product (watch out for any tie-ups with cellular operators like Apple did for its iPhone with services brands like Airtel and Aircel).

The mobile phone has a 4.3 inch qHD Super AMOLED Advanced capacitive touchscreen (540x960 pixel resolution) display and runs on a slightly tweaked Android 2.3.5 (Gingerbread) operating system which is upgradable to Ice Cream Sandwich whenever it is made available. It is powered by a 1.2 GHz dual-core Cortex-A9 CPU, TI OMAP 4430 chipset and has 1GB of RAM. The device comes with 16GB of internal memory and a pre-installed 16GB microSD card making the total available memory 32GB.

The mobile phone has an 8 mega pixel autofocus camera with face detection and LED flash which can also record full high definition (HD) videos (1080p) at 30frames per second (fps). It also has a 1.3 mega pixel front facing camera. On the connectivity front, the mobile phone has Wi-Fi, Wi-Fi hotspot, Bluetooth 4.0, A-GPS, a microHDMI port and a microUSB port. It also has 3G and 4G LTE (not sure if the 4G version will come in India).

The dimensions of the device are 130.7mm x 68.9mm x 7.1mm and its weight is 127 grams. The device has a 1,780 mAh battery which according to the company will provide up to 12 hours of talk time and 204 hours of stand-by time. The device will be available in black colour.

As far as the specifications of the device go, there is no doubt that Motorola has gone out of its way to appease its customers. The camera is nice, the processor is good enough and the display definitely stands out. Add to the fact that the device should be one of the first ones to get the ICS update and you have a sweet package. But the pricing will play a major role in the acceptability of the product in India where there are no contracts available to oil the deal.

The devices direct competitors in the market will include HTC's Sensation, Samsung's Galaxy S II, the iPhone 4S (whenever it's made available in India) and the recently launched Galaxy Nexus.

The company had way back in 2004 launched the first RAZR mobile phone which turned out to be an instant hit. What followed was a series of clamshell mobile phones (commonly called flip phones) by the company under the RAZR banner that sold more than 130 million units over a period of a few years. Whether the new RAZR is able to follow their legacy and repeat the success of its predecessors is something we will have to wait and see.