Willingness To Fail Is Key To Becoming A Successful Entrepreneur: Vinod Khosla 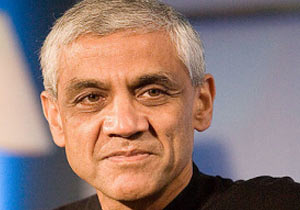 Willingness to fail is the key to becoming a successful entrepreneur, according to veteran venture capitalist Vinod Khosla, who feels that one should reject 'expert's opinion' and must follow his/her business idea.

"I would like to say that willingness to fail gives the ability to succeed," said Khosla in his opening speech to a packed gathering at the NASSCOM Products Conclave in Bangalore today.

Interestingly, the IIT-Delhi grad tasted failure early in his life. At the age of 20, his entrepreneurial venture to start a soy milk company and sell to the people in India who did not have refrigerators did not fructify. But he went on to co-found Sun Microsystems in the USA and then turned into a successful venture capitalist.

Khosla had more words of wisdom for the budding entrepreneurs. "In a business, you can lose 1x of your or their money, do what you love and are passionate about, show guts and confidence, start leading, always ignore conventional wisdom and be prepared to take risks.

There will be people who will have lots of things to say about a new business idea. Reject those experts' opinions and go on with your idea," he emphasised.

Speaking about the start-up ecosystem, Khosla said that product start-ups would always be more interesting. "Innovations come from start-ups and not from the incumbent. The only one incumbent who stood apart was Apple," he said. However, start-ups would require good management and experience, added Khosla.

"You do reasonable things by being unreasonable. Every five years, people make forecasts and they get it wrong very often. So don't believe in forecasts," said Khosla.

Giving an interesting anecdote, he pointed out how management consultancy McKinsey was once asked to forecast about mobile phone subscribers. "But they got it wrong. It was because the phone size in 1980s was very big. But in recent years, it has become smaller," he summed up.

The ace venture capitalist also referred to the lack of role models, risk-taking culture, cluster system and early-stage investors in India that mostly hinder entrepreneurial efforts across the country.

"Once the models are there, it will be easy for entrepreneurs to conceive ideas and follow those. Also, there is need for a healthy cluster system for start-ups. Seed-stage investors are also required here," he pointed out.