Taking On Cash On Delivery For E-com Vendors: Gharpay 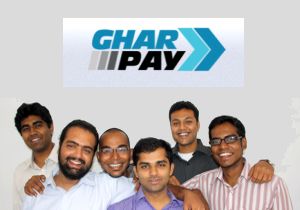 For a company that started on a motorbike (mind you not a garage) being tethered to ground realities of doing business in India would come naturally. So when Hyderabad-based Gharpay ('ghar' stands for home in Hindi) started around a year back it had a clear roadmap of tapping on to the explosion in e-commerce transactions while bridging the financial infrastructure gap in the country.

A big proportion of the country's consuming population has the money and a wishlist to buy products through the internet but do not have the means to strike the transaction (read: plastic money or even internet banking systems).

Gharpay handles cash on delivery (CoD) for retailers(mostly online but also some offline ones too). It essentially offers a cash payment collection network from the customer's doorstep to retailers.

How Does It Work

Users buying, say, a mobile handset from an e-commerce site, choose the CoD option. Once the transaction is confirmed, a Gharpay executive arrives to collect the cash. He has the invoice printed out and collects the amount. The mobile arrives later, either by the delivery employees of the e-commerce site or courier executives.

The typical amount collected by a Gharpay agent is Rs 1,800. Gharpay is not a logistics provider and hence does not bring you the handset before collecting cash.

"The reactions to our start-up range from astonishment to surprise to delight in the fact that finally somebody is doing what we do. Online companies are delighted we are addressing their problem with offline payments," says Arpit Mohan, co-founder and CTO, Gharpay.

Although e-commerce was pioneered in the developed world, the CoD model of payment system is more a jugaad borne out of structural issues in doing business in an emerging market like India.

But to be fair, it's not just an Indian phenomena and has already achieved success in China, where around 60 per cent of the e-commerce transactions are offline. This concept also holds a lot of potential for emerging markets.

The Beginning And Status Report

In October 2010, ex-BITS Pilani students Arpit Mohan and Abhishek Nayak (now CEO) were discussing the sudden growth of e-commerce in India when they came across the issues in payments. "As students, we had undergone personal experiences with online shopping that ended badly since we did not have a credit card. There was no CoD option available," says Mohan.

"Considering that there are just 200 million plastic cards in India today, we wondered what happens to those customers who don't have credit cards. That is the crowd that we decided to target - those who don't have the power to pay online or don't have bank accts," he said.

Mohan and Nayak hired a payment executive and set up Gharpay in Hyderabad in January 2011. "The company literally started on a motorbike," says Mohan.

Three months later, more batch mates from BITS-Pilani, one of the top engineering institutions in the country, joined the firm. Gharpay began by delivering tickets and collecting cash for Redbus.in, a fast rising online bus ticketing provider. In March, Gharpay started exploring offline retail market for CoD and soon bagged Chennai-based Nathella Jewellery as a client. Gharpay says the offline store CoD business works on need to provide security to consumers who don't want to carry large amount of cash to pay for a high value purchase like a jewellery.

Phanindra Sama, CEO and founder of bus ticketing site Redbus.in, has mentored Gharpay through its initial years, offering the start-up a place to work and free advice.

Sama shares, "A solution like Gharpay is much needed for ticketing companies in India. This is a great set of entrepreneurs, who are extremely level-headed. Though it is an operations-heavy business, the team is doing a good job. By being a common service provider to many companies, they can leverage economies of scale and volume."

Armed with an undisclosed seed fund raised in August this year from the founder of Sierra Atlantic and angel investor Raju Reddy besides venture capital firm Sequoia Capital, it is now steadily scaling up an operations-heavy business from scratch as it prepares to go pan-India.

With some niche but prominent e-tailers such as Ferns N' Petals, Dealsandyou.com, ThinkVidya.com, MeraEvents.com, and Ayojak.com, it has set itself a nice platform to expand further.

Today, Gharpay reaches 550 pin codes in seven major cities â€“ Delhi-NCR, Mumbai, Bangalore, Hyderabad, Chennai, Pune and Vishakapatnam. It currently handles 1,500 collections per week with a team of 50 people on ground. And, next year, it is targeting a massive 2,000 collections per day. Those living in Kolkata, Ahmedabad and Chandigarh will be connected by early next year and Gharpay plans to reach a total of 15 cities by the end of the fiscal.

Surely it can't be a bed of roses as handling cash is a risky business. A complete verification check with the police is conducted before hiring a payment executive. Debt collectors, payment executives and managers at banks and credit card collection agencies have been roped in to bring in trustworthy employees. Ghost customer checks are also intermittently conducted and employees undergo intensive training. And, of course, the company has insured all its executives.

Another big challenge for expansion is quality of service, a key deterrent for retailers to outsource CoD. Most e-tailers including Infibeam.com or Homeshop18.com, decided to invest in logistics to ensure that customer service standards remain high. But Gharpay has strict turnaround times - less than eight hours, and an executive will call up a customer within 24 hours of a transaction.

A business model like Gharpay's is extremely manpower intensive and difficult to scale. But the start-up has expanded from two cities in June, 2011 to five by August and seven by September. Today it employs 63 employees and has offices in Hyderabad, Chennai, Delhi-NCR, Mumbai, Pune, Vishakapatnam and Bengaluru.

Seed capital providers Reddy and Sequoia Capital help the founders with running its business and growth strategies. However, attrition at lower levels is an issue and multiple benefits are offered to executives as a retention strategy.

The most critical aspect in the business is efficiency and Gharpay has turned towards technology to tweak its engine. It is developing a proprietary application that enables managers to re-route orders faster. The aim is to get a manager to handle 150 people using technology. It is also testing a mobile device that will allow its executives to take print-outs at the doorstep. The device is currently in the pilot stage.

Today, online shoppers use net banking, mobile payments and prepaid cash instruments like Itz Cash Card or Oxigen. However, all of them ride on existing payment instruments. There are also offline models, where a provider ties up with several offline retail stores that have kiosks and customers can drop off cash for bills, products or a service. Accepting cash from customers on delivery of goods, like Gharpay does, extends the target market beyond the urban elite.

Cash on delivery is a preferred option for many customers, even those with bank accounts, as it is more comfortable and does not change their behaviour, says Mohan.  He does not plan to expand into logistics and warehousing, which is a different ball game altogether.

Online retailers throw a perspective on what's important for them.

"The main issue for an e-commerce company is keeping track of the package. Until it is shipped, you have visibility but after that, there is no information coming forth. But the quality of courier companies is improving day by day as they address the challenges facing e-commerce in India," said Vishal Mehta, CEO of Infibeam.com.

Many, like Infibeam.com, prefer to build their own workforce to deliver goods and collect cash. "Already 50 per cent of our transactions are cash on delivery and this is expected to increase. When you think of enhancing the last-mile customer experience, you have to offer a choice of payments. Cash on delivery and package delivery are accretive in the long run as they save on payment costs," according to Mehta.