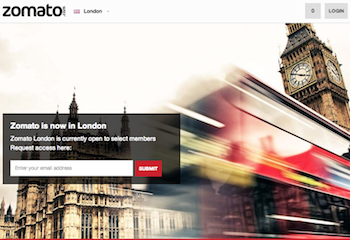 Gurgaon-based DC Foodiebay Online Services Pvt Ltd, which owns the popular restaurant and event-listing site Zomato, has expanded to Europe with the launch of a new section focusing on London. In September last year, the company forayed into the global market by adding a Dubai section and made foray into Sri Lanka in November with a Colombo section.

According to the company, the new section provides in-depth information about 14,000-plus restaurants in the Greater London area, featuring scanned menus, photos, mapped co-ordinates, opening and closing times and cost of food for two, among others. In addition, there is a new feature on the site called 'dish search' that will enable London foodies to look for restaurants serving their favourite dishes from more than 8,00,000 unique food items listed on Zomato London.

Although the London section is currently open to select members only (you can request for access on the site), it will be available to all from January 26.

IIT-Delhi alumni and ex-Bain employees Deepinder Goyal (CEO) and Pankaj Chaddah set up Zomato in July 2008. Initially, it only catered to Delhi-NCR, but has now expanded its services to 18 cities in India, the UAE, Sri Lanka and the UK. Besides Delhi-NCR, other cities on Zomato's map include Mumbai, Bangalore, Pune, Hyderabad, Chennai, Kolkata, Chandigarh, Ahmedabad, Jaipur, Lucknow, Indore, Ludhiana, Dubai, Abu Dhabi, Sharjah, Colombo and London.

The company also claims that the site attracts more than 9 million users every month (around 30 per cent increase from November last year) and is currently covering 69,000 restaurants.

"London is a very mature market in terms of internet and smartphone penetration among users accessing local information. Our goal is to provide the foodies in London complete information about the restaurants around them before they make the choice to dine out, get the food delivered or order a take-away," said Goyal. 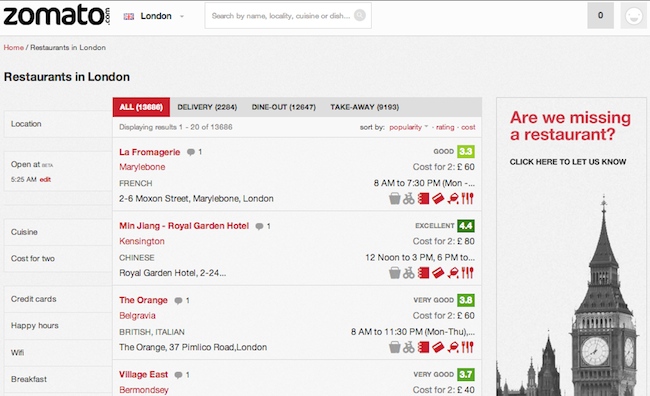 Going forward, the company plans to further expand its reach into continental Europe, the Middle East and the South-east Asia in 2013.

In September 2012, Zomato raised $2.3 million in its third round of funding from Info Edge (India) Ltd, which runs the recruitment site Naukri.com and other classifieds like the matrimonial site Jeevansathi.com and the real estate portal 99acres.com. The investment was made through optionally convertible cumulative redeemable preference shares of Zomato Media. With that round, Info Edge's total investment into Zomato stands at Rs 31.06 crore and its total holding is 48.5 per cent. Zomato had also raised two rounds of external funding from Info Edge "the first round in August 2010 and the second in September 2011.

It had also forayed into the print space with a co-branded (and we guess, sponsored) Citibank Zomato Restaurant Guide 2012, for four cities â€“ Delhi-NCR, Mumbai, Bangalore and Pune. Zomato also upgraded its mobile app for the Android and iOS platforms to ensure convenience and enhanced user reach.