Nokia has finally launched its next generation of Lumia devices in India. The smartphones, called Lumia 920, Lumia 820 and Lumia 620 were first unveiled in September last year, and the company had mentioned that it will launch them in the Indian market early this year. All three run on the Windows Phone 8 operating system. While Lumia 920 and 820 will be available from Jan 11, 620 will be available from next month. The devices are priced at Rs 38,199 and Rs 27,559 for Lumia 920 and 820 respectively, but 620's price will be revealed closer to its launch.

Here's a quick look at the devices. 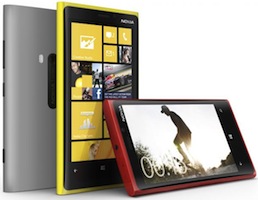 The smartphone has a 4.5 inch IPS LCD PureMotion HD+ touchscreen display (768Ã—1280 pixel resolution) with 332 pixels per inch. It is powered by a 1.5 GHz Snapdragon S4 dual core processor, has 1 GB of RAM and comes with 32 GB of internal storage and 7GB of additional SkyDrive storage.

On the camera front, the device has an 8.7 mega pixel auto-focus rear camera (with Carl Zeiss lens and PureView technology) with dual-LED flash that can record full high-definition videos (1080 pixels) at 30 frames per second and a 1.2 MP front-facing camera that can also record HD (720p) videos. The company claims that the camera has the capability of capturing blur-free videos even if it is shaking or in low light, thanks to its Optical Image Stabilisation. On the connectivity front, the device comes with Bluetooth 3.1, Wi-Fi (with Wi-Fi Direct), 3G and it also has a microUSB port.

The device measures 130.3 mm x 70.8 mm x 10.7 mm and weighs 185 gm. It has a 2,000 mAh battery that the company claims will provide 17 hours of talk time and 400 hours of standby time. The device comes with Nokia Maps (for navigation), A-GPS and Near Field Communication (NFC). It also comes with Nokia City Lens, the latest addition to the Nokia location suite. By pointing the camera at a city street, City Lens overlays information about restaurants, shops, hotels and more on the surfaces of buildings, enabling users to better explore their surroundings. It will be available in black, white, red and yellow colours. 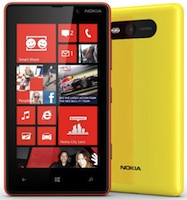 This mid-range Lumia has a 4.3 inch ClearBlack AMOLED touchscreen display (480Ã—800 pixel resolution) with 217 ppi. The device is powered by a 1.5 GHz Snapdragon S4 dual core processor and has 1 GB of RAM. It comes with 8 GB of internal storage that can be further expanded an additional 32GB with a microSD card and 7GB of additional SkyDrive storage (similar to Lumia 920).

Lumia 820 features an 8 MP auto-focus rear camera (with Carl Zeiss optics) with dual-LED flash that can record full HD videos (1080 pixel) at 30 fps and a front-facing VGA camera. On the connectivity front, the device comes with Bluetooth, Wi-Fi (with Wi-Fi Direct), 3G and it also has a microUSB port and a microSD card slot.

The device measures 123.8 mm x 68.5 mm x 9.9 mm and weighs 160g. It has a 1,650 mAh battery that the company claims will provide 14 hours of talk time and 330 hours of standby time. The device comes with A-GPS and NFC and in addition to all the colours that Lumia 920 will be available in, this smartphone will also feature a cyan coloured model.

One nice feature of these smartphones is that they can be charged wirelessly without plugging them in. While Lumia 920 has wireless charging built-in the device, users can also charge Lumia 820 wirelessly by adding on a Wireless Charging Shell. 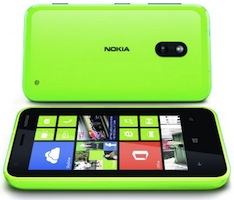 The little sibling of the Lumia family has a 3.8 inch TFT capacitive touchscreen display (480 x 800 pixel resolution) and 246 ppi. It is powered by a 1GHz Snapdragon S4 dual-core processor, has 512MB of RAM and 8GB of internal memory that is expandable with a microSD card.

Lumia 620 comes with a 5MP auto-focus rear camera with LED flash that can record HD videos and a front facing VGA camera. On the connectivity front, it has Bluetooth, Wi-Fi, 3G, and a microUSB port and a microSD card slot. The dimensions of the device are 115.4 mm x 61.1 mm x 11 mm and its weight is 127g. The smartphone runs on a 1,300mAh battery and has NFC and A-GPS. The smartphone will be available in magenta, yellow, cyan, white and black colours.

With the latest range of Lumia WP8 devices, Nokia wants to lead the change for the Windows Phone ecosystem, which has not seen much adoption among users who have chosen to stick to their Androids and iOS devices. Also, although these are decent devices, they lack the firepower to give the Samsung Galaxy SIII's and the iPhone 5's a run for their money. In the same OS, the devices will compete with HTC's 8X (Rs 35,781) and 8S (19,761), Samsung's Omnia M (Rs 15,900) and Omnia W (Rs 15,425) and Ascend W1 (yet to be launched), among others.

In addition to that, the ongoing CES 2013 has seen the unveiling of a number of feature rich and power-packed smartphones (read here for more) from Sony, Huawei, etc., in comparison to which, these Lumia's don't stand a fighting chance. And while those devices will take a while to be launched in the Indian market, we would still suggest you can give these guys a miss (unless you are a die hard WP8 fan, which is highly doubtful).