Rethinking objects and form are key to 3D printing revolution 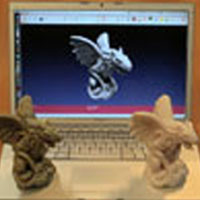 3D printing has already changed the game for manufacturing specialized products such as medical devices but the real revolution will come when designers start to rethink the shapes of objects.

3D printing removes the limitations of the manufacturing process from the equation, which means whatever can be designed on a computer can be turned into an object, 3D printing specialists say.

To really start using the technology to its full potential, designers and engineers need to imagine new products.

"You are almost unlimited as to the type of geometric complexity," said Terry Wohlers, an independent analyst who advises companies on the 3D printing sector.

Belgium-based company Materialise, a pioneer in the process, has a display of a foldable chair printed from one continuous piece of plastic - and made with the hinges already joined together, for example.

"You can do shapes and forms that otherwise would be very expensive to do with traditional manufacturing, or would require many parts that then are later assembled," Wohlers said.

The 3D process has been used to build prototypes for 25 years, but only now is making its way into regular production. Companies such as General Electric Co plan to use 3D printing to build lightweight aircraft parts, while dentists use it to create crowns in the space of an hour rather than two weeks.

3D printers have made working guns and are being tested to see if they can make houses on the moon using lunar soil. Scientists hope they may one day print human organs after researchers successfully printed tissue using human stem cells.

U.S. President Barack Obama even highlighted the technology in this year's State of the Union address as an example of innovation that can create jobs.

But Materialise CEO Wilfried Vancraen, recently voted the most influential person in the 3D printing sector by readers of TCT Magazine, a publication devoted to the industry, says the process is too slow and too expensive to replace most mass market manufacturing - at least as we now know it.

"3D Printing is not suited to making most of the products that we use today. You cannot print a Stradivarius just as you can't print an iPad," he said.

"What we have seen is that just replacing a product by a 3D printed product, for instance in the spare part application, is in many cases even not feasible, and in no cases really economical."

What you can do is involve the computer in the design process, so it can work out how to improve designs, for example to handle stress better.

"Any part that requires some structural integrity, you can let mathematics decide where to put the material," said Wohlers.

"The design can look very organic and very different than what you would normally see."

It's in fields such as medicine and furniture and clothing design that the technology has already had a huge impact.

Already, well over 90 per cent of in-the-ear hearing aids are made using 3D printing, and that lets clever software which can work out exactly how to optimize the acoustic properties of the hearing aid into the manufacturing process.

Switzerland-based Sonova, a leading maker of hearing aids, is now using graphics software to modify the shape of the device once it has been scanned, improving its physical fit to the individual ear canal, and its acoustic qualities.

That's all thanks to 3D printing, as this couldn't be done cost-efficiently before.

"By intelligently placing acoustic vents into these housings you can reduce this effect, and that's what we call an acoustic optimized vent, and that's something we can do with this software."

The biggest 3D printers, known as mammoth stereolithograhy machines, have a printing area over 2 meters long and can take up to a week to complete the biggest print jobs.

Inside, an intricate pattern of lasers play over the surface of liquid plastic resin.

Layer by layer, they solidify the resin to form the 3D printed object under the liquid. At the end of the print, the object rises out of the liquid as it is pushed up out of the reservoir.

In the case of printing houses on the moon, researchers are experimenting with mixing lunar soil mixed with magnesium oxide and a binding salt, building the structure up layer by layer at about 2 meters (6.6 feet) per hour.

To create human tissue, scientists from Scotland's Heriot-Watt University loaded human stem cells into two separate reservoirs and deposited them onto a plate in a pre-programmed pattern.

"That is the most unexplored (characteristic), but also the most difficult to really use well."

"The growth has been nothing short of phenomenal," he said.