After unveiling them for the first time in February this year, LG Electronics has now launched its next generation of Optimus L devices, L7 II Dual and L3II Dual, in India. At that time, the company also came up with a third member of the series called L5 II Dual. But there is no clarity as to when it will hit the Indian market.

Both the devices launched in India support dual SIMs; run on the Android Jelly Bean operating system and belong to the mid-priced smartphone segment. While L3II Dual costs Rs 8,800, the L7 II Dual is priced at Rs 18,650. Here is a quick look at the specifications.

The smartphone features a 4.3 inch WVGA (480Ã—800 pixel resolution) True IPS touchscreen display and runs on Android 4.1 Jelly Bean OS (with LG Optimus 3.0 user interface). It is powered by a 1 GHz dual-core processor and has 768 MB of RAM. It has 4 GB internal memory, which is expandable up to 32 GB with the help of a microSD card.

The smartphone has an 8 megapixel autofocus rear camera with LED flash that can record FWVGA videos at 30 frames per second (fps) and a front-facing VGA camera for video calling. On the connectivity front, it has Bluetooth 3.0, Wi-Fi (with Wi-Fi Direct), 3G, as well as a microSD card slot. It measures 122.2mm x 66.6mm x 9.7mm and weighs 120 gm. The company has provided a 2,460 mAh battery that the company claims will provide 12.5 hours of talk time and 852 hours of standby time.

The device comes with A-GPS and a number of additional features like Smart Screen (keeps the screen on when the device detects your face looking at the screen), Qtranslator (can recognise a foreign language and translate it into a language of your choice), QSlide (allows users to see two screens at once to maximise on-screen multitasking) and Live LG Mobile TV that allows you to watch 50-plus live channels on the go. 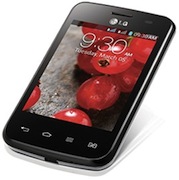 This one features a 3.2 inch QVGA (240x320 pixel resolution) True IPS touchscreen display and runs on Android 4.1 Jelly Bean OS (with LG Optimus 3.0 UI). It is powered by a 1 GHz single-core processor and has 512 MB RAM. Internal memory also amounts to 4 GB that can be expanded up to 32 GB with a microSD card.

The smartphone has a 3 megapixel rear camera that can record VGA videos at 30 fps but no front-facing camera. On the connectivity front, it has Bluetooth 3.0, Wi-Fi, 3G, as well as a microSD card slot. It measures 102.9mm x 61.3mm x 11.9mm and weighs 107 gm. The company has provided a 1,540 mAh battery that it claims will provide 7 hours of talk time and 460 hours of standby time.

This smartphone also comes with A-GPS and additional features like Smart Forwarding (helps manage calls between both SIMs), Safety Care (allows users to make quick contact to selected persons in case of emergency through Emergency Call Forwarding and My Location Notice, among others). While the L Series II smartphones are designed around LG's L-Style philosophy, the new smartphones also come with smart LED lighting.

Commenting on the launch, Amit Gujral, head of marketing at LG Mobiles, said, "The smartphone market is growing at an incredible pace and global mobile subscribers are predicted to touch 3.9 billion in 2017. India is catching up fast to this smartphone race and according to Gartner, mobile device sales in India are forecast to reach 251 million units in 2013, an increase of 13.5 per cent over 2012 sales. LG plans to reap the benefits of the intense smartphone demand in India."