Of late, there has been no dearth of excitement in the gadget world. While HTC has finally announced the launch of HTC One, Samsung has quietly unveiled another addition to the Galaxy family of smartphones. But what intrigues most is theupcoming launch of Galaxy S4 in India and the price tag that comes with it. Read on to know more about them.

After a series of delays (the phone was first unveiled in February this year), HTC has finally put a timeframe to the launch of its flagship smartphone called HTC One. The device is coming to India by the end of April and will be priced at Rs 42,900. Interestingly, prior to the launch, the prices of other smartphones in the One series have also been reduced. While the price cut has not been officially confirmed by the company, you can now get your hands on HTC One X and One X+ for Rs 25,999 and Rs 28,999, respectively (a reduction of almost 25 per cent) on a number of online stores. Here is a look at the specifications of HTC One.

This one features a 4.7 inch full HD Super LCD3 capacitive touchscreen display (1920Ã—1080 pixel resolution) with 468 pixels per inch density and runs on the latest Android 4.1.2 (Jelly Bean) operating system (upgradable to 4.2.2) with HTC Sense user interface. It is powered by a Qualcomm 1.7 GHz quad-core processor, has 2 GB RAM and in terms of internal memory, users can choose between 32 and 64 GB models.

The smartphone has a 4 megapixel HTC UltraPixel camera (with BSI sensor and an HTC ImageChip 2) with 'smart flash' that can record full high definition videos (1080p) at 30 frames per second. The camera includes an f/2.0 aperture lens and a sensor with UltraPixel that the company claims gathers 300 per cent more light than traditional smartphone camera sensors, providing good low-light performance. You will also find a number of other improvements. Plus, it has a 2 MP secondary front-facing camera that can record full HD videos as well.

On the connectivity front, the device has Infrared, Bluetooth 4.0, Wi-Fi, 3G, Near Field Communication (NFC) and 4G (depending on the region). It also has a microUSB port, a 2,300 mAh battery and comes with A-GPS support. HTC One measures 137.4mm x 68.2mm x 9.3mm and weighs 143 gm. The device has a zero-gap aluminium unibody and will be available in silver and black colours.

HTC BlinkFeed: A live stream of relevant information such as social updates, entertainment and lifestyle updates, news and photos on the home screen itself. It aggregates the latest content in one place, without the need to jump between multiple apps.

HTC BoomSound: Introduces front-facing stereo speakers with a dedicated amplifier. Also, the BeatsAudio integration is enabled across the entire experience (listening to music, watching a YouTube video or playing a game).

HTC Sense Voice: Boosts the call volume and quality in noisy environments, so that you can hear it louder and clearer.

HTC Sense TV: Transforms the smartphone into an interactive programme guide and remote control for most TVs and set-top boxes.

The latest addition to the Galaxy series sports a 4.7 inch WVGA TFT LCD touchscreen display (480x800 pixel resolution) and runs on the latest Android 4.1 (Jelly Bean) OS with Samsung's TouchWiz user interface. It is powered by a 1.2 GHz quad-core processor, has 1 GB RAM and comes with 8 GB of internal memory. There is also a microSD slot to expand the device memory by 32 GB.

The smartphone has a 5 megapixel autofocus rear camera with LED Flash that can record high definition videos (720p) at 15 frames per second and a front-facing VGA camera for video calling. On the connectivity front, the device has Bluetooth 3.0, Wi-Fi and 3G, as well as a microSD card slot. The device has a 2,000 mAh battery and comes with GPS (with A-GPS support). Galaxy Win measures 133.3mm x 70.7mm x 9.65mm and weighs 144 gm. It will be available in ceramic white and titan grey, and depending on the markets, you will get two different versions â€“ single SIM and dual SIM.

'Win' has been launched in China last week, but there is still no word on its availability in India. But going by the specifications, it should be priced between Rs 12,000 and Rs 18,000. 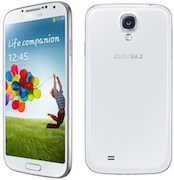 Galaxy S4, Samsung's answer to iPhone 5 (and maybe even iPhone 6), was first unveiled in the middle of March. At that time, the company mentioned that the smartphone would be available globally from the second quarter of 2013. Within a week of that announcement, it was available for pre-order at a number of online retailers at bizarre prices that went up to Rs 60,000.

According to IBN Live, the smartphone will be launched in India on April 25 and it will be available in the market a few days later. Best of all, unlike the excessive pre-order prices, Galaxy S4 will be priced under Rs 40,000. At that price, the smartphone will be a definite buy and is sure to give Apple a run for its money. Click here for a quick recap of specs and more before it hits the Indian market.