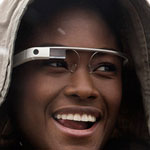 The firms aim to provide funding to startups working on applications and hardware designed to work with the glasses, they said on Wednesday.

"There's a potential for a paradigm shift here, like there was with browsers, PCs," said Bill Maris, partner at Google Ventures, referring to personal computers.

The firms will evaluate opportunities concurrently, and may invest collectively or individually. Funding for glass-related ventures will be carved out of the firms' existing funds.

Having three firms involved will increase the chance of success, the venture firms said, because the entrepreneurs they fund will benefit from three points of view. Google Ventures regularly co-invests with Andreessen and Kleiner, Maris said.

Kleiner was an early backer of Google.

There should be no shortage of developers willing to experiment with the technology.

"The tool set and the feature set that developers have to work with is very attractive," said Ben Arnold, director of industry analysis for consumer technology at the NPD Group, citing Google Glass features such as voice activation and augmented reality.

There is no dedicated sum set aside for Google Glass, making the project different to Kleiner's $200 million iFund, which Kleiner started five years ago to back entrepreneurs building applications and services for iPhones, iPods, and iPads. But the timing of the initiative-- coming before it is obvious that a big ecosystem will grow around Google Glass-- is similar, said John Doerr, a partner at Kleiner.

Google Glass can live-stream images and audio and perform computing tasks through a stamp-sized electronic screen mounted on the side of a pair of eyeglass frames. It can also record video, access email, and retrieve information from the Internet.

Chinese search engine Baidu said earlier this month that it was working on its own prototype of digital eye wear that is similar to Google Glass.

The technology started getting noticed around a year ago, when Google co-founder Sergey Brin began wearing Google Glass out and about. In February, Google invited members of the public to apply to test a version of the glasses in its Glass Explorer Program. Successful applicants must pay $1,500 for the glasses.

Google Glass will become more widely available later this year, Google has said, including a version that will work with eye wear prescriptions.

That is the version glasses-wearer Doerr said he is waiting for. In meantime, he has tried on another earlier style of Google Glass.

"My daughter thinks I look really weird," he said.