Panasonic India has expanded its Toughpad range of tablets with the launch of two new devices called Toughpad FZ-G1 and Toughpad JT-B1. Both target the enterprise segment and are priced at a whopping Rs 1.75 lakh and Rs 69,000, respectively. Here is a look at the specifications. 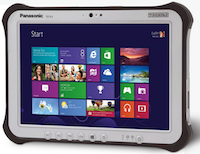 This latest addition to the Toughpad series (Panasonic launched the series late last year with Toughpad FZ-A1) features a 10.1 inch WUXGA capacitive touchscreen display (1920x1200 pixel resolution) and runs on Windows 8 Pro (with Windows 7 downgrade option) operating system. It is powered by a 1.9 GHz (with Turbo Boost up to 2.9 GHz) Intel Core i5 processor and has 4 GB of RAM (expandable up to 8 GB). Users can choose between 128 GB and 256 GB solid state drive.

This one has a 7 inch WSVGA LCD capacitive touchscreen display (1024x600 pixel resolution) and runs on Android 4.0 (Ice Cream Sandwich) operating system. It is powered by a 1.5 GHz dual-core processor and has 1 GB of RAM. The internal memory of the device is 16 GB, which can be expanded up to 32 GB with a microSD card.

The tablet has a 13 MP autofocus rear camera with LED Flash and a 1.3 MP front-facing camera. On the connectivity front, the device has Bluetooth 4.0, Wi-Fi (with Wi-Fi hotspot), optional 4G LTE, and a microSD and microUSB port. It also comes with GPS and Near Field Communication (NFC). The device has a 5,720 mAh battery that the company claims will provide up to 8 hours of battery life. It measures 220.9 mm x 129.5 mm x 17.7 mm and weighs 544 gm.

Both tablets are IP65 (Ingress Progression) certified, which means they can withstand a fall from the height of 120 cm (Toughpad FZ-G1) and 150 cm (Toughpad JT-B1), apart from being water and dust resistant. They also come with user-replaceable batteries to provide high usability to field users. The company has also launched a couple of handheld computers for the logistics industry. 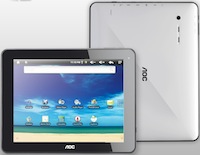 AOC, an international display brand that manufactures monitors and televisions, has entered the mobile device space in India by introducing its new range of tablets called Breeze. These tablets run on the latest Android 4.1.1 Jelly Bean operating system and come in two screen sizes - 7 inch and 9.7 inch.

Each is powered by a 1.5 GHz processor, has 1 GB RAM and comes with 16 GB of internal memory, which can be expanded up to 32 GB. The tablets are equipped with dual cameras (both front and back), micro USB ports (for 3G dongle USB stick) and a couple of USB 2.0 host ports for adding peripherals such as printers, mouse, keyboards, etc. The 9.7 inch tablet also has a micro-HDMI port for connecting with TV and other monitors.