5ideas, the seed fund-cum-accelerator floated by the husband-wife duo of Gaurav Kachru and Pearl Uppal who were previously associated with the e-com ventures of the Smile Group, has announced the first close of its investment arm, Startup Superfuel. 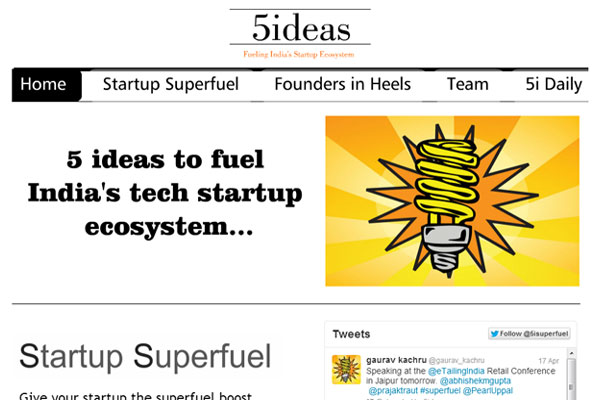 Uppal told Techcircle.in, that the venture got commitment of 25 per cent of the total targeted corpus of $10 million in the first close. The fund is now live and the first investment would be announced within weeks. "Post that, we expect startups to approach us since we are looking to do at least one investment a month to close around 10-12 investments this year," she added.

Startup Superfuel is a seed stage fund that will provide initial capital to tech startups to help them scale commercially and prepare them for venture capital funding. It aims to invest in 40 startups over the next three years. It will invest between Rs 25 lakh and Rs 1.5 crore in a company and is looking to put in up to Rs 2.5 crore in follow-on rounds. In terms of target sectors, Startup Superfuel will be looking at tech firms in niche e-commerce, mobile and geo-data, SME/B2B-focused SaaS, education, urban parenting, Big Data and ad-tech.

A new crop of accelerator-cum-seed funds have recently entered the Indian startup ecosystem. A few months ago, another such venture was floated by Rishi Khiani, former CEO of Times Internet. He launched a similar initiative called Ant Farm, which is less of an investment fund and more like an incubator. Other active accelerators include The Morpheus, Venture Nursery, GSF, TLabs and The Hatch, among others.