Google Now launches for the iOS platform, as part of the Google Search app 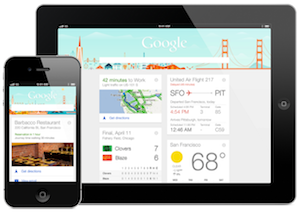 Mid last year, Google had first introduced Google Now for the Android platform, it has now launched the same for iOS as well. Although instead of launching it as a standalone app, the search giant has introduced it as part of the existing Google Search app. While existing users of the Google Search app only need to update their apps to get Google Now, first time users will have to download the Search app from the iTunes app store (here is a link for the same).

Although the company is not officially calling it a personal voice assistant, Google Now does get the job done. With this feature, users can ask questions and get voice feedback on the same (similar to Apple's Siri) with additional information displayed in the form of cards. Moreover, it gets you just the right information at the right time (at least, that is what the company claims), which essentially means that it tells you all about today's weather before you start your day, the kind of traffic you can expect on your way to office or your favourite team's score when they are playing. If you are sitting in a new restaurant, it also suggests the dishes you might like, among other things.

For example, if you ask, 'Do I need an umbrella this weekend?', you will get the weather forecast, or if say 'Show me nearby pizza places', you will be shown a map of restaurants around you with directions, phone numbers, ratings and hours. While the app has been available for the Android platform for a while, it is the first time Google has made it available for the iPhones and iPads.

"We use smartphones for all sorts of things, like getting reminders of important calendar appointments, or driving directions to the that restaurant where your table for two awaits. Google Now is about giving you just the right information at just the right time. It can also share news updates on a story you've been following, remind you to leave for the airport so you can make your flight and much more," wrote Andrea Huey, engineer at Google in an official company blog post.