Jasper Infotech Pvt Ltd, which runs India's largest online marketplace under Snapdeal.com, has acquired Shopo.in for an undisclosed amount. As a part of the deal, Snapdeal will merge the sellers on Shopo with its own horizontal marketplace and eventually shut Shopo, said Thyagarajan S, co-founder of Shopo. As of now, Shopo's product categories are redirecting to Snapdeal.

Shopo started as a handicrafts e-shop but later expanded its product focus. It was founded in 2011 by Krithika Nelson and Thyagarajan S. Nelson left the company last year due to health problems but still remains a board member at Shopo. Thyagarajan told Techcircle.in that the major reason why they opted to sell out instead of chasing funds was the economies of running an e-commerce venture.

Chennai-based Shopo is owned by Shopo Technologies Pvt Ltd and is backed by a group of VCs and angel investors including Seeders and SRI Capital. Seeders had put in around $100,000 in the startup and the company was scouting for funds since September last year. It also counts Sequoia Capital as a shareholder. 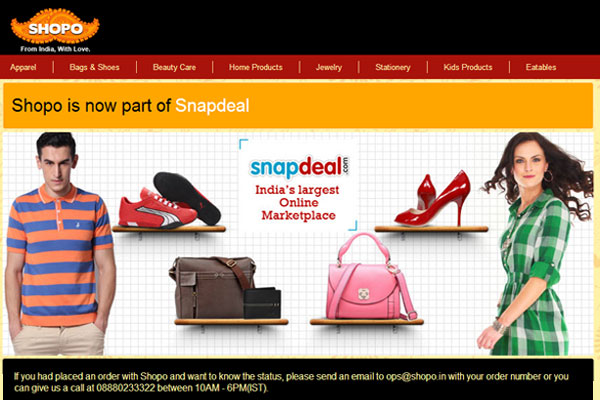 "We had almost raised a bridge round. But we realised that sustaining this business is difficult due to many problems such as customer acquisition cost, maintaining logistics, etc," said Thyagarajan. He also shared that he had met Snapdeal co-founder Rohit Bansal earlier this year and the talks began at that time. Snapdeal could leverage Shopo for certain categories and more expansion.

Kunal Bahl, co-founder & CEO of Snapdeal.com, said, "The Indian designer and handicrafts market is large but highly fragmented and the demand for such products is tremendous. The team at Shopo has built a very strong supply side for niche Indian handicraft and designer products. With this acquisition, we will now provide these unique products at great prices to Snapdeal's 20 million members, and warmly welcome Shopo's sellers to leverage Snapdeal's nationwide reach."

Snapdeal has recently raised funding from a bunch of investors including eBay and Recruit Holdings besides existing investors Nexus Venture Partners, Bessemer Venture Partners and Kalaari Capital, among others.