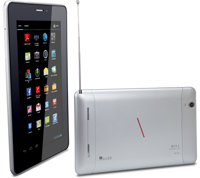 Homegrown hardware manufacturer iBall has added yet another member to its Slide family of tablets. The new device, called Slide 7334i 3G, runs on the Android Jelly Bean operating system and features a 7 inch display screen. The new tablet is priced at Rs 10,499. Here is a look at the specifications.

This tablet has a 7 inch multi-touch capacitive touchscreen display (1024x600 pixel resolution) and is powered by a 1 GHz dual-core ARM Cortex A9 processor. It runs on the Android 4.1 Jelly Bean OS and has 1 GB of RAM. The internal memory of the device is 16 GB, which can be expanded up to 32 GB with a microSD card.

Slide 7334i 3G has a 2 mega pixel camera with LED Flash that can also record videos and a VGA front-facing camera for video calling. On the connectivity front, the device has Wi-Fi, Bluetooth and 3G (as the name already suggests), and it also has a microUSB port and a microSD card slot. The exact dimensions of the tablet are not available as of now, but the tablet is powered by a 3,000 mAh battery.