Bangalore-based Serendipity Infolabs Pvt Ltd, the company that owns and operates the online taxi booking site TaxiForSure.com, has raised its first round of institutional funding from existing seed investors Accel Partners, Helion Venture Partners and Blume Ventures. In total, the company has raised $4 million in funding, most of which has come from the current round.

In May last year, TaxiForSure raised an undisclosed amount in seed funding from Accel, Helion and Blume. As part of the deal, Anand Daniel of Accel and Ritesh Banglani of Helion joined the board of TaxiForSure.

The funds raised from the latest round will be primarily used to expand the company's operations across the country. Currently, the company only operates in Bangalore and Delhi. The development was first reported by The Economic Times.

In March this year, Aprameya Radhakrishna, co-founder of TaxiForSure, told Techcircle.in about the company's plans to raise another internal round from the same investors to implement its expansion plans. "We are not looking to raise a very big amount in the next round. We just want to set the stage for the Series B from this," he had said at that time.

The company claimed to be doing around 800-900 bookings a day in Bangalore as of March 2013. It also started its operations in Delhi during the same time and is looking to expand to 15 more cities including Mumbai, Pune, Chennai, Jaipur and Hyderabad, among others. As of now, the company has partnerships with around 25 branded cab operators (like Mega Cabs) in Bangalore and 15 in Delhi. 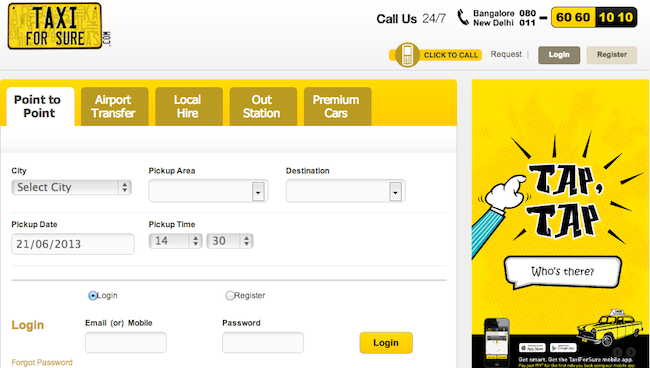 TaxiForSure was founded by Raghunandan G and Radhakrishna, both engineering graduates from NITK Surathkal who got their management degrees from IIM Ahmedabad. Before starting TaxiForSure in June 2011, Radhakrishna worked as the head of business development for PDS at Jones Lang LaSalle, India. He had also worked with Infosys. Raghunandan earlier worked with Feedback Ventures as a consultant.

The startup acts as an aggregator of car/cab rentals and its offerings include local point-to-point pick-up and drop, airport transfer, local packages (for 4 or 8 hours) and outstation packages. Besides regular rentals, it also provides luxury cars like Rolls Royce Phantom, Hummer, Limousine, Jaguar, Audi A6, BMW 7 Series and Mercedes S class, among others.

The startup currently has around 150 people on board of which the majority works for operations. It also runs a call centre for customer care and other purposes.

TaxiForSure also faces considerable competition from other players in the market and some of the VC-backed online cab-booking startups include Mumbai-based Olacabs, Inventus Capital Partners-backed Savaari car rentals and Yourcabs.com, which raised angel funding from Sprism Investment Pvt Ltd.