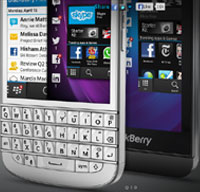 The long-anticipated offering, which BlackBerry had said would come out around mid-year, could help the company sell high-margin services to its large clients even if many, or all, of their workers are using smartphones made by its competitors.

The new Secure Work Space feature will be managed through BlackBerry Enterprise Service (BES) 10, a new back-end system launched at the start of this year that allows BlackBerry's clients to control mobile devices on their internal networks.

The company, a one-time pioneer in the smartphone arena, is now fighting to regain ground lost to Apple's iPhone and Samsung Electronics Co Ltd's Galaxy devices. To compete, it has rolled out a trio of devices powered by its new BlackBerry 10 operating system.

It hopes to win back users with the Z10, Q10 and Q5 devices that were unveiled during the first half of this year. The first comprehensive look at the success of its turnaround plan will likely emerge when it reports quarterly results on Friday.

At the same time, it has indicated a shift in emphasis from smartphones to services.

"With an integrated management console, our clients can now see all of the devices they have on their network, manage those devices and connect to them securely," David Smith, the head of enterprise mobile computing at BlackBerry, said in an interview.

"We now also have a secure work space on Android and iOS that allows our clients to secure and manage the data on those devices as well."

BlackBerry has installed some 18,000 BES 10 servers since the system was launched in January, up from a little more than 12,000 servers one month ago, and more than 60 per cent of U.S. Fortune 500 companies are testing or using the system.

The feature, when used to manage Android and iOS devices, will allow IT managers to fence off corporate email, calendars, contacts, tasks, memos, Web browsing and document editing from personal apps and content, which could be less secure.