Sony Mobile Communications has taken a page from Samsung's book and launched a phablet with a mammoth 6.4 inch display. This is even larger than the Samsung Galaxy Mega devices that sport a 5.8 inch and a 6.3 inch display, respectively. The new entrant to the Sony Xperia family is called Xperia Z Ultra and if the screen size does not seem impressive enough, there is another plus for you. The company has also added a 2.2 GHz quad-core processor in the device. Moreover, Sony has launched an all-new watch-cum-Android smartphone remote called SmartWatch 2.

Here is a look at the specifications. 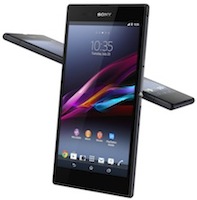 The phablet features a 6.44 inch full HD TFT Triluminos display (1920x1080 pixels resolution) and is powered by a monstrous 2.2 GHz quad-core Qualcomm Snapdragon 800 processor. The screen analyses elements, depending on the scene, and adjusts them based on pattern, outline and colour composition. It also comes with handwriting recognition, compatible with any pencil, selected stylus or pen (capacitive stylus or metal pen with tip diameter over 1 mm). The device runs on the Android 4.2 Jelly Bean operating system and has 16 GB (up to 11 GB user-accessible memory) of internal memory that can be further expanded up to 64 GB with a microSD card.

On the camera front, this one sports an 8 mega pixel autofocus camera with 16x digital zoom and Sony 'Exmor RS for mobile' image sensor that can also record full high definition (HD) videos (1080p). Then there is a 2 MP front-facing camera that can also record full HD videos. In terms of connectivity, the phablet has Wi-Fi, Bluetooth 4.0, 3G and 4G LTE (depending on the market), and also comes with a microSD card slot and a microUSB port. The company has provided its ClearAudio+ mode and Xloud loudness enhancement, for enhanced sound.

The device measures 179.4mm x 92.2mm x 6.5 mm and weighs 212 gm. According to Sony, the phablet's 3,000 mAh battery will provide up to 11 hours of talk time and 23 days of standby time. The device also has Near Field Communication (NFC) and GPS (with A-GPS support), and will be available in black, white and purple colours. The smartphone is both water-resistant (IPX5/8) and dustproof (IP5X), and can be used to click pictures or make films underwater.

Sony's Walkman, album and movies media applications enable discovery of online and offline content. The Walkman app leverages the company's audio engine and Facebook integration for sharing and discovering new music. The movies app enables users to discover, manage and play movie content, along with access to a library of movies and the latest TV episodes. The album app instantly lets users access their photos and albums from within the album app.

Battery stamina mode: Improves the standby time of the smartphone four times as it recognises when the user is not using the display and automatically turns off the functions which are not required. The company will also make available a number of business-oriented applications, such as software updates, in the future.

Basically a second screen for your Android smartphone that enhances the functionality of the existing smartphone and also serves as a multi-functional watch, notifier and phone remote control.

With it, users can handle their calls, receive notifications (such as messages, calls, e-mail, Facebook/Twitter feeds), control the music player, take a photo remotely from the watch (using a smart camera app), control presentations using Presentation Pal, read previously downloaded e-mail or use lifestyle apps like Runtastic to map and track their fitness activities, without taking the phone out of the pocket. The watch also has NFC connectivity for one-touch pairing with devices like the Xperia Z Ultra.

The watch has a 1.6 inch Transflective LCD touch-and-swipe colour display (220x176 pixels) and works with Android 4.0 and later versions. It has Bluetooth 3.0 and can run up to four days on a typical battery charge. The watch measures 41.6mm x 41.1mm x 9mm and weighs 23.5 gm (only for the main unit). The main watch unit can be personalised with any standard watch strap and can also be used as a standalone watch (although no point in that, considering the low battery life). Similar to the Xperia Z Ultra, SmartWatch 2 is also water-resistant and dustproof.

Both Xperia Z Ultra and Sony SmartWatch 2 will be available worldwide from Q3 2013. However, details of India launch date and pricing are not available yet.