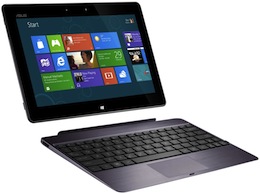 ASUS India has launched its latest hybrid device Transformer Book TX300 in the Indian market. The device has a 13.3 inch display and the company claims it is the world's thinnest Window 8 tablet and detachable notebook. The Transformer Book will be available in the country for a whopping price of Rs 91,999 starting the second week of this month.

The hybrid device sports a 13.3 inch full HD IPS touch panel display (1920Ã—1080 pixels resolution) that has a 178 degree viewing angle. It is powered by an Intel's 3rd Generation i5-3337U processor and runs on the Windows 8 Professional operating system. Separate storage has been provided for the notebook and tablet with a 500GB hard drive (for the notebook) and a 128GB solid state drive (SSD) for the tablet, with additional 'ASUS WebStorage' cloud storage.

On the camera front, this one sports an 5 mega pixel rear camera that can record high definition videos (720p) and a front facing camera that can also record HD videos. Apart from a backlit keyboard and gesture touchpad, the dock also has a 500GB hard drive, two USB 3.0 ports and a built-in battery of its own. Then there is a mini display port for connecting to an HDTV for big-screen viewing.

The device has an all-metal design with spun metal finish (similar to the ASUS Zenbook) and features ASUS SonicMaster audio with Bang & Olufsen ICEpower for rich and detailed sound. In terms of connectivity, the device has Wi-Fi, Bluetooth 4.0, a microSD card slot and a microUSB port.

The exact dimensions of the device are not available as yet. According to the company, the device will provide up to five hours of battery life in full notebook mode and up to eight hours in tablet mode, with up to two weeks of standby time. In addition, 'Power Up' technology extends the notebook's battery life by disabling the dock's hard drive and ports, giving up to eight hours' use.

Interestingly, the company has provided a smart-stay power cord that does not plug into a socket, but snaps onto it magnetically (taking cue from Apple are we!). A firm tug is enough to break the connection, so there is no risk of dragging the device off a desk by accidently snagging its power lead.