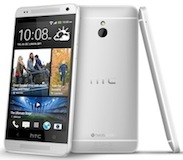 After launching its flagship smartphone HTC One in India in April this year, the company has now unveiled a compact version of the device called HTC One mini. Samsung has already been doing the same for its smartphones for a while now. The company had earlier launched Galaxy SIII mini (a smaller version of the original Galaxy SIII), and it unveiled a smaller version of Galaxy S4 in May this year. Here is a look at the specifications of the HTC One mini.

The smartphone sports a 4.3 inch Super LCD2 capacitive touchscreen display (720 x 1280 pixels resolution) with 341 ppi pixel density. In comparison, the original HTC One has a 4.7 inch full HD Super LCD3 capacitive touchscreen display (1920Ã—1080 pixel resolution) with 468 pixels per inch density. The smartphone is powered by a 1.4 GHz dual-core processor and runs on the Android 4.2.2 with HTC Sense user interface. It has 1GB of RAM and comes with 16GB of internal memory.

HTC One mini has a 4 megapixel autofocus rear camera with LED Flash that can record full HD videos (1080p) at 30 frames per second, and a 1.6MP front-facing camera that can also record HD videos (720p). According to the company, the UltraPixel camera in the device captures 300 per cent more light than traditional smartphone camera sensors. An 'HTC Zoe' feature enables users to click three-second videos, with a range of editing capabilities, and a 'Video Highlights' feature automatically creates visually appealing 30-second slide shows that users can share on social networking sites.

On the connectivity front, the device has Bluetooth 4.0, Wi-Fi, 3G and 4G, and comes with a microUSB port. The dimensions of the device are 132mm x 63.2mm x 9.3 mm and its weight is 122 gm. The company has provided a 1,800 mAh battery that it claims will provide up to 500 hours of stand by time. It comes with A-GPS support but no NFC. Sporting a aluminium unibody, the device will be available in glacial silver and stealth black colours.

Apart from HTC Zoe, the company has also added a number of new features in the device that include HTC BoomSound- features dual frontal stereo speakers that deliver less distortion and finer sound detail; and HTC BlinkFeed- delivers social updates, news updates and photos directly to the smartphones home screen.

The exact India pricing and launch date for the device are not available as of now, however, the smartphone will be available in select markets from August, and rolled out globally from September 2013. Looking at the specifications of the HTC One mini, we feel it will be priced in the Rs 24,000 to Rs 30,000 price range. In comparison, the HTC One is available for a price of Rs 41,250. In terms of competition, it will directly compete with the yet to be launched Galaxy S4 mini.

While HTC One mini looks like a decent smartphone (at least on paper), calling a 4.3 inch device 'mini' makes us a little nostalgic. Remember the good old days (not so long ago) when anything bigger than a 4 inch screen was considered a fairly large device. Now we already have smartphones / phablets going up to 6.3 inch screen sizes.