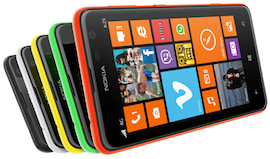 Earlier this month, Finnish handset giant Nokia had taken the wraps off its flagship Windows Phone 8 device called Lumia 1020, which sported a mammoth 41 mega pixel rear camera. The company has now followed it up by unveiling its largest Lumia device in terms of screen size. The smartphone, called Lumia 625, sports a 4.7 inch display screen and is targeted at the mid-price range segment. Here is a look at the specifications of the device.

The smartphone has a 4.7 inch WVGA touchscreen display with 201 ppi pixel density and sunlight readability enhancement, and runs on the Windows Phone 8 operating system. At 4.7 inches, the screen is even bigger than the 4.5 inch screen provided in the Lumia 1020. It is powered by a 1.2GHz dual core Snapdragon S4 processor and 512MB of RAM. The internal memory of the device is 8GB that can be further expanded up to 64GB with a microSD card.

On the camera front, the device has a 5-megapixel autofocus rear camera with LED flash that can record full high definition videos (1080p) at 30 frames per second and a front facing VGA camera. In terms of connectivity, the device comes with Bluetooth 4.0, Wi-Fi, 3G and 4G (depending on the region), and it also has a microUSB port and a microSD card slot.

The device measures 133.25 mm x 72.25 mm x 9.15 mm and its weight is 159 gm. The company has provided a It has a 2,000 mAh battery that the company claims will provide over 15 hours of talk time on 3G. The device comes with Nokia HERE maps, HERE Drive (for car) and HERE Transit (for public transport) and A-GPS. In trademark Nokia style, the device will be available in orange, yellow, bright green, white and black colours. The device also comes with Nokia Music, which offers ad-free, subscription-free music that users stream or download on the Lumia 625.

While the company has priced the device at $290 (Rs 17,230), an India launch date and price for the same is not available as of now. Although considering its specifications, we feel it should lie in the under Rs 20,000 range.