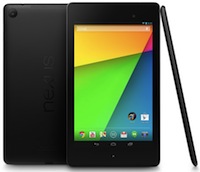 Search giant Google has finally launched its next generation Nexus 7 tablet. The device, which comes with the tagline 'made for what matters', has been developed by Google in partnership with Asus (similar to the original Nexus 7) and is the first device to run on the just announced Android 4.3 operating system (we will tell you more on the new OS in a separate post). The company has also launched Chromecast â€“ a TV dongle that enables one to connect the TV screen with smartphone, tablet and laptop.

But first things first and here is a look at the specifications of Nexus 7.

Google has bumped up the screen and this tablet features a 7 inch IPS HD scratch-resistant corning glass display (1920x1200 pixel resolution) with 323 ppi pixel density. That's a significant improvement as the earlier version featured a 7 inch backlit IPS HD touchscreen display (1280Ã—800 pixel resolution) with only 216 ppi pixel density. Plus, the new tablet is the first device to run on Android 4.3 operating system and is powered by a 1.5 GHz quad-core Qualcomm Snapdragon S4 Pro processor. It comes with 2 GB RAM and users have a choice between 16 GB and 32 GB models.

The tablet sports a 5 mega pixel autofocus rear camera that can record high definition videos and a 1.2 MP front-facing camera for video calling. On the connectivity front, it has Bluetooth 4.0, Wi-Fi and optional 4G LTE (depending on the region), and a microUSB port.

It measures 200 mm x 114 mm x 8.65 mm and weighs 290 gm (Wi-Fi only) or 299 gm (Wi-Fi+LTE). The company has provided a 3,950 mAh battery (less powerful than the 4,325 mAh battery available in the original Nexus 7) and claims it will provide 9 hours of battery life and 10 hours of web browsing/reading. It also comes with GPS and NFC (for Android Beam), and is capable of wireless charging. The new tablet also features stereo speakers and virtual surround sound from Fraunhofer (the inventor of MP3 format of music files).

The tablet comes with the new Google Play Games app, which enables users to invite friends and challenge gamers around the world to compete for top achievements and race to the top of the leaderboard. Plus, you will find a suite of Google apps like Chrome, Maps, YouTube, Gmail and Google Now. You can also read about the specifications of the original Nexus 7 here.

The cheapest model has been priced at $229 (Rs 13,495) and will be available in the US from July 30, followed by other countries. The previous Nexus tab was launched in India in March this year for Rs 15,999 â€“ so we can expect higher pricing (hopefully under Rs 20,000) for this one, whenever it is launched in the country. We just hope that Google does not take forever, like it did last time around, to launch the new tab in the Indian market. As for competition, the biggest rival will be Apple's iPad mini (pricing starts at Rs 21,900) and the recently launched Amazon's Kindle Fire HD (pricing starts at Rs 15,999).

Google has also launched Chromecast, a device that enables you to stream media from a number of devices on to the largest screen â€“ your TV. One can simply plug it in to the HDMI port of the TV, post which he/she can use the smartphone, tablet or laptop to 'cast' (basically send) online content on to the TV screen via Wi-Fi. As of now, the dongle works with services like Netflix, YouTube, Google Play Movies & TV, and Google Play Music, although the company is planning to add more apps (like Pandora) going forward.

Apart from browsing and viewing content on the TV screen, you can also use the smartphone/tablet/laptop as a remote for performing functions like play and pause, volume control and more. Users can also multitask, sending e-mail or surfing the web, while 'casting' content on to the TV screen. In addition, they can use the Chrome browser to project any browser tab on to the TV. This can be used for viewing pictures (from e-mail and sites like Facebook, etc.) or video clips from a news site. The service also works across platforms (an interesting move by Google), which means in addition to Android, it will also work with iPhones, iPads, Mac and Windows.

The company has also developed Google Cast, a technology that enables developers to build apps for Chromecast. The device has been priced at $35 (Rs 2,063) in the US, but an India launch date and pricing are not available yet.

While it is an interesting initiative, the best thing for Google in India would be to partner with players that offer India-focused content. These could be players like Eros Now, BigFlix, Spuul, Hungama and BoxTV, among others, as most of its current partners (Netflix, Pandora, etc.) don't even have an Indian presence.

Earlier this year, Apple launched its media streaming device Apple TV in India, priced at Rs 8,295. But unlike Chromecast, Apple TV is a digital box that brings the iTunes store content to a user's television and also helps connect iDevices to the bigger display with the help of AirPlay.