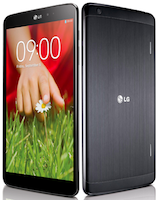 After launching its flagship smartphone G2 early last month, LG has now unveiled G Pad 8.3 tablet, the latest addition to its G Series lineup. The device runs on the Android operating system and is the first tablet to be launched by the company since LG Optimus Pad, which it had launched back in 2011. The company claims that it is the first 8-inch tablet to sport a full HD display and will officially launch it at the soon to begin IFA 2013 trade show in Berlin. Here is a look at the specifications of the device.

G Pad is equipped with an 8.3 inch Full HD Widescreen Ultra Extended Graphics Array (WUXGA) display (1920 x 1200 pixels resolution) with 273 ppi pixel density, and runs on the latest Android 4.2.2 (Jelly Bean) operating system. It is powered by a 1.7GHz Quad-Core Qualcomm Snapdragon 600 Processor and has 2GB of RAM. The internal memory of the device is 8GB.

The tablet has a 5 mega pixel rear camera that can record videos and a 1.3 MP front-facing camera for video calls. While the company has not disclosed details on its connectivity options, the tablet should at least offer Bluetooth and Wi-Fi, if not 3G. The device has a 4,600 mAh battery, measures 216.8mm x 126.5mm x 8.3mm and weighs 338 gm. It will be available in white and black colours.

In addition, the tablet will also come with a QPair app that will enable calls and messages received on a LG smartphone to appear on the tablet. Users can then send simple replies through the G Pad itself. Apart from LG smartphones, QPair will also allow users to connect with other manufacturers' smartphone and tablets (Jelly Bean OS recommended). Also, notes created on the G Pad's QMemo will be seamlessly saved into users' smartphones and can then be shared from either device.

Considering the large screen, the tablet's user experience (UX) also provides a number of features unique to the G Pad, like Slide Aside- enables multitasking by simply 'sliding' currently open apps off to the side using a three-finger swipe; QSlide- allows users to control up to three different apps in one window; and KnockON- turns the device on and off by tapping the display twice.

The device will be rolled out globally starting the fourth quarter of 2013. Exact India pricing and availability was not available at the time. While the tablet offers decent specifications, it will be interesting to see if it can entice consumers enough to make a purchase, especially considering the company's last tablet outing did not fare that well.